M'sians urged to participate in population census online by Sept 30

PETALING JAYA: Malaysians are being given two weeks to participate in the Statistic Department's population and housing census online to avoid face-to-face meetings with census takers.

Senior Minister (Security Cluster) Datuk Seri Ismail Sabri Yaakob said although the e-census had been made available since July 7, only 1.5 million Malaysians had participated.

"This figure is way below the target, as Malaysia's population is about 32.7 million," he told a press conference on Tuesday (Sept 15).

Census takers will start knocking on doors from Oct 7 to Oct 24.

"To avoid face-to-face meeting with them (census takers), people have up to Sept 30 to fill up (their particulars) online (www.mycensus.gov.my)," he said.

In view of the Covid-19 pandemic, he urged the public to participate via e-Census before the Sept 30 deadline.

"I appeal to the members of the public to opt for e-census to reduce face-to-face interactions," he said.

Ismail also advised the public against serving food and drinks to census-takers in view of Covid-19 pandemic.

"Malaysians are known for their hospitality. We are used to serving food and drinks to visitors.

"But please, refrain from doing so to the census takers.

"The government has imposed stringent SOP (standard operating procedure) for census operations at private homes and institutional residences," he said.

Face-to-face interviews are prohibited in locations that have been locked down.

Of those nabbed, 14 were remanded while 118 others were issued compound notices. The offences they committed included failure to observe social distancing (49) and failure to fill in the customer logbook (12).

Action was also taken against two individuals for not footing bills for mandatory quarantine.

Action was also taken against 30 individuals who defied the lockdown order. 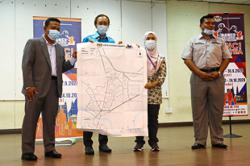