Enough is enough: Sabah voters have had it with party hopping

KOTA KINABALU (Bernama): Voters in Sabah are urging politicians to stop the practice of switching parties after being elected by the people, saying it is a betrayal of their trust.

Several voters interviewed by Bernama expressed disappointment with party hopping as voters prepare to go to the polls on Sept 26.

A voter in the Api-Api constituency, Gil Tupang, 63, said defecting was the act of small-minded leaders.

"I have lost interest to vote. I know this (not voting) is wrong, but I am disappointed by their actions – they seem to treat our votes as worthless.

"I feel disheartened because we voted them on promises they made – but after winning, they decided to leave (their party)," he said.

He also said party hopping shows a lack of integrity and a blatant disregard for the fate of the people.

Husin Wahab, 65, from Kudat, said defecting after being elected is a selfish act.

"I really do not like these party hoppers. Their actions disrupt political stability and cause problems to the people. The worst part is it upsets the economy," he said, adding that because of these "political frogs" many voters have lost interest in going to the polls.

Rajali Hamzah Asmat, 40, wants the practice of party hopping to be abolished, especially after this state election.

He urged the winning parties to serve with honesty and for the good of Sabahans.

"They give us hope and make promises – but in the end, nothing. So disappointing," he said.

Another voter, Lee Yuit, 63, said a candidate and the party he represents should be like one big, close family and should stay together, win or lose. 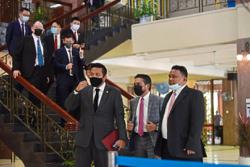 How to stop party hopping