He said Luyang constituents had commended the Perikatan government’s success in containing the Covid-19 pandemic.

Gee, who is the Luyang candidate for SAPP, said people also praised the Federal Government for allocating huge sums in financial assistance to help people whose livelihoods were affected by the pandemic, citing the Bantuan Prihatin Nasional (BPN) scheme as an example.

Among the concerns raised by the public is the dengue situation in Luyang, he said after a walkabout in Foh Sang and Bornion Centre in Luyang, not far from the state capital here.

“According to data from the State Health Department, Luyang is one of the affected areas with quite a high number of dengue cases.

“I promise to help, including by writing a report to the relevant authorities to resolve this matter as soon as possible, ” he said.

Gee added that such efforts could include clearing all the drains in residential areas. 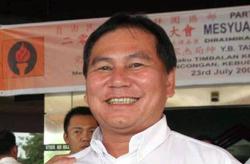