Sabah polls: No, there is no 16-cornered free-for-all in Tandek

She said there were only six candidates vying for the seat.

Anita, who is a former Parti Bersatu Sabah member, is now contesting as an Independent against Barisan Nasional, Parti Cinta Sabah, Upko (Warisan Plus), Liberal Democratic Party and another Independent.

The 16th Sabah state polls will take place on Sept 26. 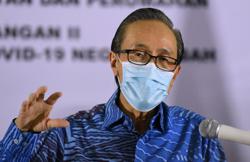