Appearing at Tuaran town to show his support for Sabah Pribumi Bersatu Malaysia chief Datuk Hajiji Noor, who is defending his Sulaman seat, Muhyiddin made the announcement on Nomination Day on Saturday (Sept 12) as the group hopes to form the next state government.

The coalition was agreed to during discussions among the parties on Friday (Sept 11), and will strengthen the allies’ cooperation here, said Muhyiddin at the foyer of the Tuaran Bersatu office.

"The purpose of all the parties gathering together and contesting in all 73 seats is none other than to replace Warisan Plus as the next state government.

“Yesterday, we all sat together in a meeting and reached a consensus to name our pact Gabungan Rakyat Sabah, ” he added, before going on a walkabout at a fish market nearby, while Hajiji left for the Dewan Seri Sulaman nomination centre.

Muhyiddin also hinted that if Gabungan Rakyat forms the state government, Hajiji is a potential chief minister should the rest of the partners agree. 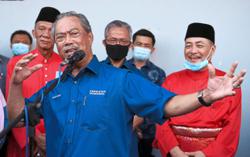