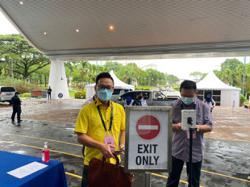 PUTRAJAYA: Two directors of a company in Kuching have been arrested in connection with a RM800mil road construction project.

The two were arrested under suspicion of corruption and submitting false claims amounting to millions of ringgit to the Defence Ministry.

The false claims are said to be made for 10 road upgrading projects in Sarawak, valued at RM800mil.

The directors, both aged 44, are business partners and own three companies which authorities believe have been monopolising the projects.

Sources said they were arrested in a special operation in Kuching on Tuesday (Sept 8).

Sources also said companies belonging to the suspects were awarded the "Jiwa Murni" project under the Defence Ministry from 2010 to 2016.

"A lot of complaints were made by local communities on the bad condition of the roads because the construction quality failed to meet specifications.

"Some of the roads can't even be used and were damaged just months after it was built," said a source.

The "Jiwa Murni" project was an initiative to connect small towns in the interior of Sarawak.

According to the same source, a technical study done found that the roads built did not meet the Works Department's specifications at all.

"The study found that the roads were layered with only two inches of tar from the surface of the earth. There were no layers of sand of stone underneath, as specified in the contract.

"This caused the roads to damage when heavy vehicles plied through, and as a result, other vehicles could not use the roads," said the source.

It is learnt that the Sarawak government had ordered the Works department to do repair and upgrading works, which the contractor had failed to do.

"Four new contractors were appointed, but what was shocking was that one of the companies given the job was owned by the same directors," said the source.

He said the two suspects will be brought to a Kuching magistrate's court, where the MACC will apply for them to be remanded.

He said investigations into the case were made with the cooperation of the Defence Ministry after an internal audit report done by the ministry showed the project's failure.