PUTRAJAYA: Civil servants should not view support letters issued by ministers or politicians as a directive to approve applications, says the Malaysian Anti-Corruption Commission (MACC).

"We have issued a statement on this issue before. It is normal for politicians to issue support letters.

"However, civil servants must not use these letters as a directive or decision (by the issuer).

"There are standard operating procedures that civil servants need to follow and abide when it comes to giving approvals to applications or requests," said Shamsun after presenting a keynote address at the 2nd Malaysia Anti-Corruption Forum on Thursday (Sept 3).

He said this following the recent controversy where Defence Minister Datuk Seri Ismail Sabri Yaakob issued a letter of support to the son of his deputy who was seeking to be appointed to Pharmaniaga's board of directors.

The letter, which went viral on social media, contained a handwritten note from Ismail Sabri to the Armed Forces Fund Board (LTAT) chairman.

Ismail responded to the issue by saying that support did not mean an appointment would be a given.

LTAT has a controlling stake in Pharmaniaga via its umbrella holding company Boustead.

Meanwhile in his speech, Shamsun said there was no need for commercial organisations to worry about the implementation of corporate liability provisions in the Malaysian Anti-Corruption Act.

He said corporations should ensure that adequate corruption prevention measures were in place.

"The MACC is finalising a checklist which companies can use as a guideline to draw their own measures on corruption prevention," he said.

The checklist entails issues such as gift policy, political donations, sponsorships, among others.

The implementation of the corporate liability law took effect on June 1.

Among others, the provision encourages commercial organisations to ensure that their business does not involve any corrupt activities. 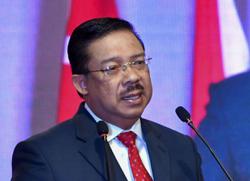