All quiet: Despite it being lunch time, a restaurant in Taman Sahabat, Teluk Kumbar, Penang hardly has any customers. — ZHAFARAN NASIB/The Star

BALIK PULAU: Parts of Penang are back under a stricter movement control order (MCO) as Covid-19 cases threaten to flare up.

After more than 100 days of “Covid-free bliss”, the local authorities are on the alert again and both city councils have tightened measures in several parts of the state after new cases began sprouting up in the community.

Roadside hawkers may not serve dine-ins and can only do takeaways. Restaurants and coffeeshops are allowed to have dine-in patrons but standard operating procedures need to be observed strictly.

No form of crowding is allowed.

The areas ordered to observe these restrictions are Teluk Kumbar, Sungai Batu and Gertak Sanggul on the south of Penang Island, and Central and Southern Seberang Prai Districts on the mainland.

Night bazaars (pasar malam) are closed for now and in Taman Sahabat, Teluk Kumbar, the Penang Island City Council (MBPP) warned in a statement that it would close the morning market unless the community adheres to the SOP strictly.

Case 9149, a 58-year-old woman who lives in Taman Sahabat, was confirmed to have contracted the virus on Friday.

A visit to this rural suburb yesterday found the place to be a ghost town with only a handful of shops and stalls open and hardly anyone out and about.

Nor Fazila Jaafar, 33, who works at a Malay food shop near the walk-up flats where Case 9149 lives, said she was told yesterday morning that they had to stop allowing dine-in.

“Business was so bad. We cooked less, but we still only sold 30% of the food all morning and afternoon.

“We discovered that our rice comes from the sundry shop where the Covid-19 patient’s daughter works, ” she said. 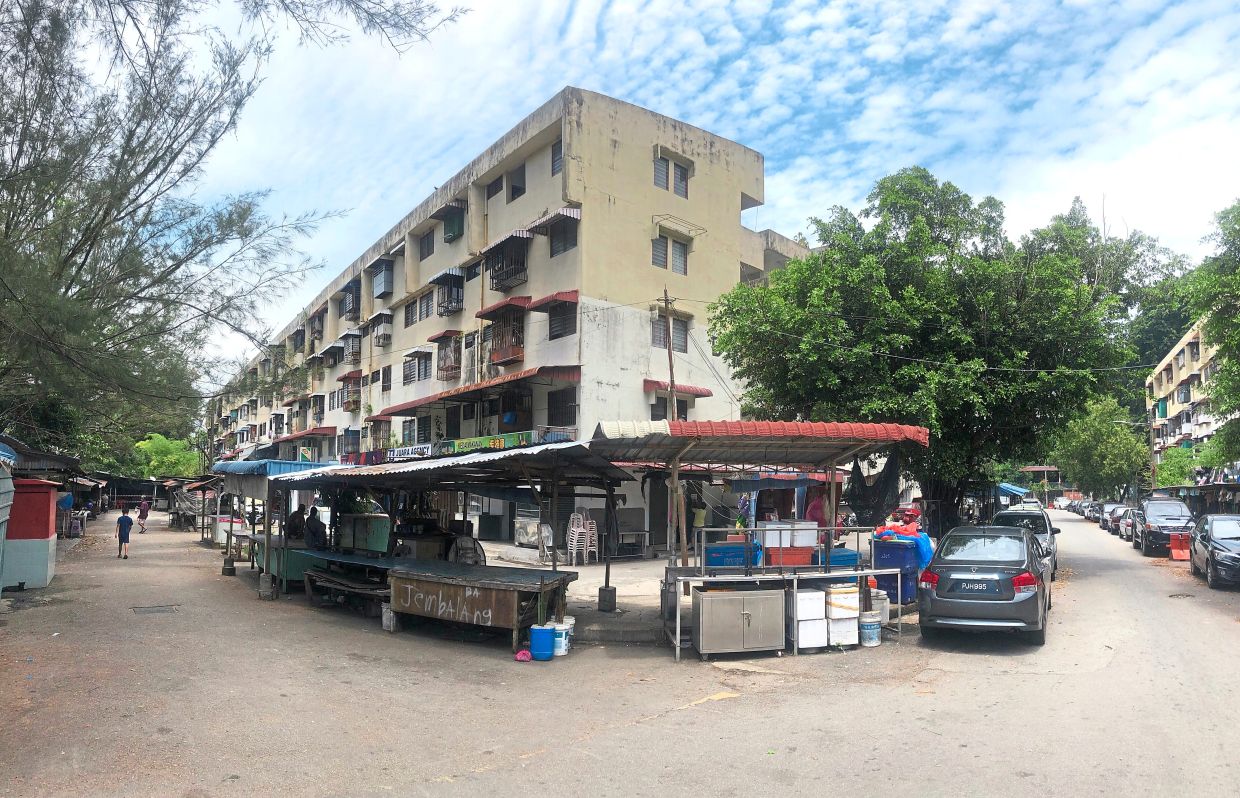 The area around the block of flats where the newly detected Covid-19 positive patient lives also appears to be deserted.

Nor Fazila said MBPP enforcers visited her shop in the morning and explained the new restrictions to them.

“We will take a few days off and see if people will come to our morning market here.

“If people stop coming, we will not operate for a while, ” she said, adding that medical officers from the Health Ministry had recorded her details and would call her for tests soon.

Arifin Ibrahim, 40, who runs a sundry shop, said he had never interacted with Case 9149 but knows that her daughter works in a sundry shop two doors down from his.

“That sundry shop is closed now. I am guessing it is closed as a precautionary measure.

“My wife asked me not to work today, but I wanted to check in case we needed to sanitise, ” he said.

“They told me not to go to the clinic yet because there was a huge crowd there.

“They will tell me when it is my turn to get tested.

“I am worried and I am following all the SOP, ” he said.

A walk around Taman Sahabat, however, showed that some of the local residents, including children, were walking around without wearing masks or had them pulled down to the chin.

Penang had two new cases yesterday in George Town, and the Health Ministry announced that both had been in close contact with the index case (Case 9113) of the Tawar cluster, a 53-year-old businessman from Baling, Kedah, who had attended the funeral of a family member from July 31 until Aug 1.

On Aug 7, a 56-year-old female patient from Kedah (Case 9129), who was admitted to the Penang Adventist Hospital due to a leg infection, was later tested positive. She is the sister-in-law of Case 9113.