IPOH: The woman who was pictured having a meal while wearing a pink Covid-19 home quarantine tag on her wrist at an eatery in Meru Raya here has been jailed one day and fined RM8,000 after she pleaded guilty to defying a quarantine order.

According to the charge sheet, the accused, on July 6 at about 8am, had gone to a cafe at Lengkok Meru Permai 1, and by doing so, she had defied the Home Surveillance Order issued to her under Section 15(1) of the Prevention and Control of Infectious Diseases Act 1988.

The offence, under Section 22(b), carries a punishment under Section 24(a) of the same act, which prescribes a jail term of not more than two years, or a fine or both upon conviction.

The accused, who was not represented, said during mitigation that her husband had passed away, she had three children, and this was her first time offence.

Nur Emah, who was dressed in a black jubah and tudung, was tearing up while telling the court interpreter her mitigation points, which the interpreter later told the magistrate.

Ahmad Fakurazi, who is also the department’s Environmental Health officer, told the court that deterrent sentence should be imposed on the accused for defying the order.

In the statement of facts, it was stated that upon arrival at the KL International Airport (KLIA) from Britain, she underwent a Covid-19 screening at KLIA and was required to undergo home quarantine from July 4 to 18.

The department had received a complaint on the viral photo of the senior citizen on July 21.

On July 22, the media had reported that the woman with the pink tag had been identified and at that time, she was being treated at Hospital Raja Permaisuri Bainun.

According to a report by Sinar Harian, quoting a source, the woman tested positive for Covid-19 in her second test after 13 days of home quarantine, and has been admitted to the hospital since July 17. 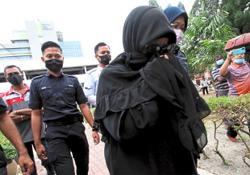 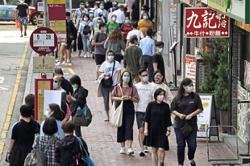 ‘No quarantine for returnees’