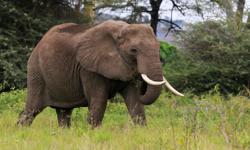 Gone rogue: One of the elephants captured by Perhilitan in Johor. — Bernama

JOHOR BARU: The Johor Department of Wildlife and National Parks (Perhilitan) has captured three wild elephants believed to have caused conflicts in the Kota Tinggi district. They were caught during operations at two locations on Friday.

Perhilitan director Salman Saaban said the capture of a male and two female elephants was made following attacks that led to one death on July 27.

There was also a case of elephants going on a rampage on July 31. Both incidents occurred at KM9.6 Jalan Mawai.

According to Salman, the capture was made by Perhilitan Johor Elephant Capture Unit in collaboration with the National Elephant Conservation Centre Kuala Gandah, Pahang, involving 12 personnel who were divided into two groups.

“We will monitor the three elephants until they are relocated to a new habitat,” he said in a statement yesterday.

He said the three wild elephants were in good health.

On July 27, a 56-year-old local security guard stationed at a sand mine at KM9.6 Jalan Mawai was found dead after being attacked by a wild elephant at 10.30am.

A 52-year-old Malaysian woman managed to escape in the nick of time when her fruit stall was overrun by wild elephants at the same place at 8pm on July 31.

She suffered about RM1,000 in losses and damage. — Bernama