MELAKA: A historical association has come out to support the proposal to rename St Paul's Hill to Bukit Melaka.

The Malaysian Historical Association's Melaka chapter president Prof Datuk Dr Mohd Jamil Mukimin said that he supported the proposal by Melaka Museum Corporation (Perzim), claiming that the palace of the bygone Melaka Sultanate and a grand mosque dating back some 758 years was originally on the hilltop.

"This is based on the history of the Melaka Sultanate that goes back to 1262, and the structures that were there until 1511," he said in a statement on Wednesday (Aug 5).

Dr Jamil claimed the Portuguese had destroyed the structures when they conquered Melaka in 1511 before building their own structure on the hilltop.

"A replica of the Melaka Sultanate palace was later constructed by the government at the foothill beside the remains of A' Famosa Fort," he said.

Dr Jamil added that the association welcomes the statement from Melaka Chief Minister Datuk Sulaiman Md Ali that feedback from the various stakeholders and serious deliberations were needed before changing the name.

In 2012, academicians claimed that 1262 was the actual year the Melaka Sultanate began, not 1400 as stated in local history books.

Meanwhile, Save The Portuguese Action Committee chairman Martin Theseira said Melaka's history could even supersede other civilisations in this region, with the founding date going back to 1262.

"We are probably among the earliest civilisations in this region, this is mind-blowing," he said.

Theseira said that historians should now look beyond Portuguese chronicler Tome Pires’ records that Paramjcura (Parameswara) was the founder of Melaka in 1400, as the person who founded the historic city could be another individual altogether.

"The existence of the 'Makara' statue that was originally displayed on the stone wall next to the Stadthuys building could also support the Melaka Sultanate history.

He said Makara was still on the wall in 1914, when the author of the Federated Malay Railways’ pamphlet mentioned it in the information for travellers.

Makara, is a legendary sea creature from Hindu/Buddhist mythology. 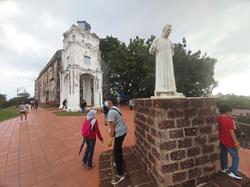 ‘No’ to renaming St Paul’s Hill 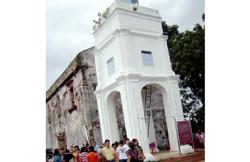