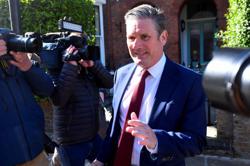 KOTA KINABALU: A lawyer and two businesswomen have filed for a judicial review to stop the Sabah state elections in view of the current Covid-19 threat.

In their court papers, the trio also sought a declaration that holding the Sabah state election during the term of the recovery MCO is unlawful, null and void.

Jude said that they had named Juhar as first respondent and the Election Commission chairman as second respondent in the suit filed via e-filing with the Kota Kinabalu High Court at noon Sunday (Aug 2).

The High Court electronic system set Sept 14 for the court to hear their bid, Jude said.

They also hoped that the court considers an Erinford injunction granted against both Tun Juhar and EC chairman until the conclusion of the appeal of Tan Sri Musa Aman in the Federal Court in respect of his claim to be the rightful Chief Minister of Sabah.

In their court papers, they said the MCO from March 18,2020, was tentatively scheduled to expire on August 31,2020

They argued that Sabah was currently under the threat of the Covid-19 pandemic and thanks to efforts by frontliners, the pandemic had been brought to a level of control but the danger remains.

“Therefore, this is not the time or place to have the state election because it will bring people together, creating crowded spaces and confined areas and remove physical distancing on a large scale for the population of Sabah, ” they said in their court filing.

This creates the possibility of the Covid-19 pandemic in Sabah getting out of control with increased infections and deaths, they said in the papers that also claimed that to hold an election would be highly prejudicial to the people of Sabah and endanger their health.

In the court documents, they said that the MCO does not allow for elections to be held or any activities concerning elections and if held, it should be after Aug 31.

They also said that the EC cannot hold the elections and the electoral rolls must first be cleaned up before the state election.

Elections must be held fairly and people who go to vote must do so in conditions that are safe and without any form of fear or insecurity, Jude, Binsing and Romana argued in their court papers.

Following the dissolution of the assembly on July 30, it is mandatory for the Election Commission to hold state elections within 60 days.

Highway roadblocks will not remain static at one location, says Bukit Aman
Sunway Pyramid reopens on Tuesday (May 11) afternoon after sanitisation
WHO: Implementation of nationwide MCO is the right move
Hajiji: Celebrate Raya by following SOPs, giving thanks to frontliners
No way through for foreigner, woman who used fake papers to attempt interstate travel
No ban on goods vehicles during Hari Raya, says Transport Ministry
Sri Ram to defend himself against Rosmah’s bid to disqualify him as lead prosecutor
First batch of Sinovac vaccines prepared in Malaysia ready to roll out
Student stabbed and thrown off balcony in PJ after row over debts and drugs
Prioritise residents of nursing homes for Covid-19 vaccination to avoid outbreak, urges Sibu MP