Drawn to importance of newspapers

Art on the wall: A passer-by posing with the mural featuring Seeni Muhamad in Jalan Penjara.

KANGAR: The vibrant colours of several murals in Jalan Penjara have brightened up the town of Kangar.

Among the murals is one featuring a man holding a stack of The Star with several other newspapers in the background.

The mural featured the owner of the bookstore, Seeni Muhamad Mohamed Yoosuf.

“They say a picture tells a thousand words and this mural depicts the print media.

“Seeni is still selling newspapers today, ” said Saidan, 65, who formerly worked with Filem Negara and is now into painting murals.

“Seeni is a product of the old school, where newspapers were an integral part of the industry.

“He wanted to show people how important newspapers are.

“He posed for photographs which I turned into five of my murals at the back alley of Jalan Penjara, ” said Saidan, a member of the Perlis Artists Association.

Seeni Muhamad said he was The Star newspaper’s sole agent in the ‘70s and had been selling newspapers for almost 50 years.

“Saidan and I read The Star and we want to tell people that the newspapers are still an important source of information in our daily life, ” said the 69-year-old book store owner.

The mural was among 25 paintings commissioned by the Perlis government’s “Kangar Street Arts” initiative.

The initiative is part of an effort to beautify the town and a collaboration between the state government and the Perlis Artists Association aimed at attracting more tourists to the state.

Two schools near Kangar closed for a week 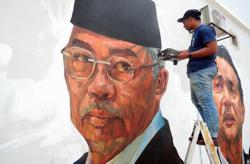