In a press conference at the Sabah Administrative Centre building here on Thursday (July 30), he said he had met Yang DiPertua Negeri (TYT) Tun Juhar Mahiruddin at the istana this morning, who gave his consent to the dissolution of the state assembly.

"I am aware of the economic uncertainties, the Covid-19 issue we are facing, and tomorrow is Hari Raya Aidiladha, but I have decided to apply to dissolve the state assembly.

"The law states the CM of the day can request for such dissolution, and under the state constitution, the governor has the authority to dissolve or not.

"I met TYT last night (July 29) to express our intention, and then we made preparations, so this morning I went to istana around 8-something, and he approved this.

"I think it's time for us to return the mandate to Sabahans," he told reporters.

Before the press conference, Shafie met with fellow MPs and state assemblymen, saying some, like Datuk Seri Madius Tangau, were not there because they were in Kuala Lumpur or had gone back to their hometowns for Hari Raya Haji.

Shafie said he made the decision with a heavy heart because groups from Kuala Lumpur kept coming down to the state to pressure the state government.

He said even though initially they had 45 statutory declarations in support of him, some assemblymen had changed sides after being wooed.

"But I am confident the people of Sabah have integrity. Sabah people have the power to decide who the government is.

"I know I can buy or persuade and woo (representatives), but are these the values we want from Sabah YBs and leaders administering this state?" he asked.

"I am still the CM; in terms of numbers, we still have it, even though they (Tan Sri Musa Aman's side) claimed they have the bigger numbers, we need to follow the laws. Even though the state assembly has been dissolved, during the period of 60 days for the Election Commission to set polling dates, I am still the caretaker CM until EC announces the dates," he stressed.

"Then it must be the correct choice. Whether to pick Musa Aman, Datuk Bung Moktar Radin, Datuk Hajiji Noor, Datuk Seri Anifah Aman or Shafie." 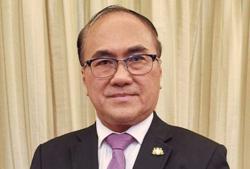