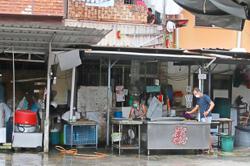 Changing fate: Khairul trades his wings in the sky for a two wheeler during the pandemic. — Photo courtesy of Khairul Anwar

PETALING JAYA: From flying high in the skies, Khairul Anwar Ajid now delivers food on two wheels to support his family after being put on unpaid leave as Covid-19 disrupts major airlines from flying.

The 40-year-old pilot with 5,200 flight hours has not received any income since April.

“I still have to pay for my monthly expenses such as my house, car, utility bills, to put food on the table, and for my child’s education. This is a huge burden.

“But my career as a pilot has enabled me to think on my feet to get out of this bad situation.

“That is why I quickly searched for a new source of income. As I’ve never done business before, my choices are limited ... become an agent to sell products or an e-hailing rider,” he said yesterday.

Khairul explained that he weighed two factors when looking for a job: fast cash and flexibility.

“Based on these factors, I decided that being a food deliveryman was suitable.

“(With this job) I am paid every Wednesday each week and my work schedule is flexible,” said Khairul who only started flying at the age of 30.

Despite the challenges, Khairul said his flying experience taught him to never give up.

“The issues which we face when flying are bad weather and technical problems and we have our standard operating procedure (SOP) to handle problems like these.

“So, I applied the same concept when I lost my income,” he said.

Khairul’s plight also touched the hearts of Malaysians when he shared how he became a food deliverer to survive.

His Facebook post received 498 shares and 1,400 likes with most Malaysians encouraging him and supporting his side business of selling New Zealand beef.

Khairul, who has a degree and masters in Computer Science, encouraged those in a similar situation to think about their purpose.

“I too almost gave up and lost direction but I got up. I think we need to think of the ‘big why’ in life.

“My ‘big why’ is my wife and child. When I look at my eight-year-old child, I have to be strong so that my child can have everything that is needed right now.

“It is not fair to my child to be in a tough state just because of the current situation. That is why as a father, I have to do anything for my family,” he said.

Khairul said he planned to go back to being a pilot when the industry recovers.

“I think flying is in my blood. I already have nine years of flying experience, so it is unlikely that I will change to another field. I like flying,” he said.