GEORGE TOWN: A new law should be looked into to deal with cases where young ladies have to be charged for dumping their babies, says Penang state women and family development, gender inclusiveness and religions other than Islam committee chairman Chong Eng.

Citing the case of college student M. Santhea, who tossed her newborn baby out of a 13th-floor apartment unit, Chong Eng said charges under Section 302 of the Penal Code offered no room for negotiation once convicted.

Earlier (July 10), Santhea was charged with killing her newborn daughter under Section 302 of the Penal Code for murder, which carried the death penalty upon conviction.

Chong Eng said in cases where young ladies or students are charged under Section 302 of the Penal Code for murder, it carried the death penalty upon conviction.

"I think we need to look into a new law because this is too heavy a punishment for young students.

"We should be more civilised and help these young girls who have messed up their own lives instead of punishing them," she said during a visit on Tuesday (July 21) to the Women's Welfare Council premises in Lebuh Babington.

"I think it is important as well, for young men and young ladies to learn the consequences of unprotected sexual intercourse, which often leads to unwanted pregnancies or sexually transmitted diseases inclusive of HIV.

"So I think we need to step up efforts in educating them.

"And it is especially important for girls to be aware of this.

"This is because girls are the ones who get pregnant and they are being punished.

"But do people forget that every baby has a father? What are you doing with the father of the baby?

"If you punish the mother you must punish the father as well because, in such situations, one person cannot tango on their own.

"It really takes two people for these things to happen and some young ladies are being taken advantage of," she added. 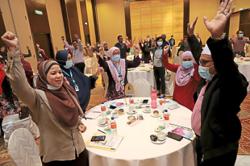 More than lending an ear