KUALA LUMPUR: Construction workers who were scheduled to start work at their construction job in front of Jalan Cochrane in Kuala Lumpur Tuesday (July 21) morning were nabbed by Kuala Lumpur City Hall (DBKL) enforcement officers for selling used clothes outside the site.

Several of them, all Bangladeshi nationals with valid working permits (to work at the construction site), had laid out the second-hand clothing along Jalan Cochrane ala "pasar malam"-style hoping to make a quick buck before clocking in to their daytime job.

A part of Jalan Cochrane was taken up by these individuals who were peddling second-hand clothing outside the construction site at 7am Tuesday morning.

These items were confiscated by DBKL.

DBKL had shut down more than a hundred premises in the city operated by illegal foreign workers and seized the items being sold since the movement control order was implemented on March 18.

Most of these illegals operate in shoplots, roadside stalls and outlets operating inside premises.

Of late though, there have been reports of many cases of foreigners peddling goods on the street.

It is learnt that motorists on their way to work this morning spotted them and reported to DBKL.

Enforcement was carried out under Section 70 of the Street and Drainage Act 1974. 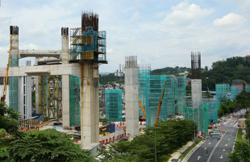 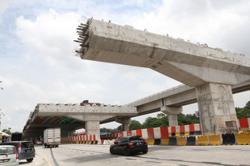