PETALING JAYA: As Malaysia continues its battle against Covid-19, many people and commercial areas are taking for granted the standard operating procedure (SOP) and other precautions to prevent the spread of the virus.

Aishah Farah Mohamad Nazri, who went for a three-day trip to Perhentian Island that ended on July 13, said she felt vulnerable as most of the places she visited no longer adhered to the health SOP.

“There was no social distancing when I took the bus and plane as well as at public places like the restaurants I went to.

“I went prepared with masks, sanitiser and even my own pen, but in most of the places, like the jetty, neither our temperature nor our contact details were recorded.

“We were only asked to scan the QR code for contact details, but most of the visitors ignored it, ” she said. Aishah also said the public pool at the hotel where she stayed had no rules to limit visitors or a lifeguard to enforce social distancing.

“It was probably because not many people were at the pool as most visitors preferred the beach.”

The only thing she viewed as following SOP was breakfast.

“It was served at our table and we had to pick which set we preferred.”

However, pharmacy assistant Masmira Ramly said most of the places she visited seemed to still adhere to the SOP.

“Supermarkets, shops in malls and food courts I’ve visited still record visitors’ temperature and ensure only a limited number of people enter at any given time, ” she said.

The 29-year-old said unexpected circumstances such as large crowds might make it difficult for people to comply with social distancing.

“I see only a few people taking the SOP for granted, but the management of shops and restaurants should be responsible for strictly enforcing the rules so that visitors are protected, ” she said.

Senior business consultant Ezila Farhana Kamari said most Malaysians generally abide by the SOP but in certain circumstances, they might be difficult to follow.

“I observed that people break SOP when going into lifts at both residential and office buildings, especially during peak periods.

“People queue and stick to the limit of four people per trip.

“But it can take more than half an hour during peak periods for people to catch the lift, so I can see rules being broken when there are long and slow queues or if only a few lifts are available, ” she said.

Commenting on the SOP at public rest areas, Ezila said she noticed many people queuing at fast food joints but when it came to seating, people would still leave gaps to maintain social distancing.

The 33-year-old mother hoped that people and commercial places would continue maintaining social distancing and hygienic practices to keep everyone safe from the coronavirus.

‘Don’t let your guard down’

Parents must teach children the importance of SOP 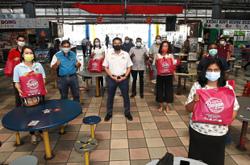