KUALA LUMPUR: With the latest appointment of Datuk Azhar Azizan Harun and Datuk Seri Azalina Othman Said as the Speaker and Deputy Speaker respectively, Ampang MP Zuraida Kamaruddin is hoping for no more sexist remarks being uttered in the House in the future.

Zuraida said that this is because Azhar and Deputy Speaker Datuk Mohd Rashid Hasnon are gender-sensitive individuals.

“We will try to achieve zero sexist remarks for this term, and we hope it will sensitise the men. The Speaker is gender-sensitive and so is Rashid, the Deputy Speaker, ” she told reporters during a press conference at Parliament on Tuesday (July 14).

At the same time, Zuraida also said that Azalina, as the first female Deputy Speaker, would definitely be very sensitive towards female issues.

“And it is for sure that MPs will be stopped when making sexist remarks, which should have been left aside a long time ago, ” she added.

Zuraida, who was present along with other female Perikatan Nasional leaders during the press conference, said that Azalina’s appointment is a historical and positive step for Malaysia.

“We believe that Azalina as the Deputy Speaker would not only defend the dignity of women, but is also a good example and an inspiration to all women in Malaysia.”

She also said Azalina’s appointment shows that Perikatan is a progressive coalition, where female participation is ensured at every level.

Chaos broke out on the first day of the July Parliament session on Monday (July 13), after Batu Kawan MP Kasthuri Patto alleged that Baling MP Datuk Seri Abdul Azeez Abdul Rahim had made a remark about her skin colour.

On Tuesday (July 14), Azhar, also known as “Art Harun”, ordered Abdul Azeez to retract and apologise over the remarks made against Kasthuri.

Azhar said the decision was made after looking at the Dewan Rakyat hansard and found that the word “gelap” (dark) used by Abdul Azeez was offensive.

Meanwhile, Kasthuri, who held a subsequent press conference after Zuraida, said that Abdul Azeez had intentionally uttered the words “Gelap, tak nampak” (dark, can’t see) and also “pakailah bedak” (use powder) against her in Parliament on Monday (July 13).

“It’s clearly racist, referring to the colour of my skin and discriminating against me on the grounds of not being fair, ” she added.

She noted that an amendment to the Standing Orders 35(4) in 2012 had made provisions to safeguard male and female parliamentarians from sexist and offensive language in Parliament.

“It has been eight years since the amendment but vulgar, sexist, misogynistic language still rolls off the tongues of unrepentant MPs who are often let off the hook with a light rap on the wrist and not ejected or suspended from the House, ” she added.

“I welcome the decision and I hope it will be the last of this kind of unparliamentary language in the respected Dewan Rakyat, ” she added. 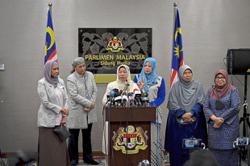 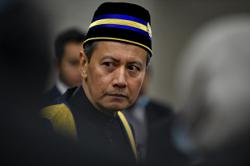