KOTA KINABALU: An injured baby pygmy elephant rescued from an estate in Lahad Datu in April is now a friendly and happy calf.

Fearful and almost blind due to an infection when it was first spotted, the two-year-old calf named Sahabat is now on its way to a full recovery, and is expected to be able to return to the wild very soon.

“We had to make sure he calmed down for translocation. We then treated his eyes and he’s getting much better now,” Dausip said after a briefing session on Sahabat’s condition at the Lok Kawi Wildlife Park here yesterday.

The park is some 500km away from the plantation.

Dausip said they used touch and other means to reassure Sahabat that they were there to help and not hurt him.

Slowly, Sahabat began to trust the rangers and vets, and a bond was formed between them.

“Sahabat is now very happy whenever humans approach him, treating them as friends and family,” he said.

Department director Augustine Tuuga said they were doing all they could to ensure that Sahabat’s eyes were cured before releasing him back to his herd.

Sahabat’s medical fees were funded by FGV Holdings Bhd. The calf had been found wandering by FGV workers, Tuuga said.

“The workers took extra precautionary measures due to Covid-19 and assisted our personnel who came to examine the calf.

“They then made a special holding crate to transport Sahabat for further treatment in Kota Kinabalu,” he said.

This is not the first time the company has helped to rescue wandering and injured elephants.

In March, FGV saved four elephants trapped inside a pond.

The company is now in the midst of constructing electric fencing involving five estates to reduce human-elephant conflicts in the Felda Sahabat area.

Earlier, Tuuga said the Lok Kawi park could not support another elephant as it was already looking after 15 others.

“Elephants sent to Lok Kawi are those with injuries, needing treatment and rehabilitation.

“Those that have recovered will be sent back to the wild,” he said, adding that only elephants that could not fend for themselves remain in the park.

Tuuga said another elephant centre, the Borneo Elephant Sanctuary, was being set up in Kinabatangan.

Once completed, some of the elephants in Lok Kawi would be relocated there.

Pygmy elephants are classified as endangered species. It is estimated that there are less than 2,000 left in the wild in Sabah. 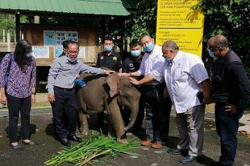 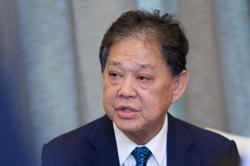