PETALING JAYA: The plan to open up the country to travellers from six countries should be expanded with the business and tourism sectors saying that Thailand, Vietnam and China should also be considered.

Key business sector officials said the three countries had managed the Covid-19 situation well and Malaysia could benefit from opening up its borders to them.

Officials said the Health Ministry was currently studying modalities to include Thailand and Vietnam in the “open border” policy.

It was reported that Malaysia has begun discussions with six “green” countries – Singapore, Brunei, Australia, New Zealand, Japan and South Korea – that it would like to open its borders post-Covid-19.

However, Health director-general Datuk Dr Noor Hisham Abdullah said any sort of agreement between Malaysia and those countries must be “mutual and reciprocal”.

Several top businesses and retail key players have met with Prime Minister Tan Sri Muhyiddin Yassin and the Economic Action Council (EAC) to table their suggestions directly to the government.

Bumiputera Retailers Organisation president Datuk Ameer Ali Mydin, who met the Prime Minister, said that the government should slowly but cautiously open up its borders to selected “green zone” countries such as Thailand and Vietnam, to kick-start the economy.

“The solution is to open up the country slowly but cautiously and at the same time ensure that necessary steps are taken to avoid a spike in Covid-19 cases,” he said.

“We told the Prime Minister that we need more confidence-building measures for the public.

“We want to say that it is alright to go out but at the same time we must follow the SOP and the government must allow confidence-building in the coming days,” he said.

“Eventually we will have to open up more sectors and start allowing more people to come either from Singapore, Brunei and other selected countries.”

Ameer said they gave some suggestions on how to move forward quickly and gave input on how a clear SOP would instil public confidence and eliminate any ambiguity on such matters.

Malaysia Shopping Malls Association president Tan Sri Teo Chiang Kok said that it was important for the government to allow remaining sectors to reopen as long as they comply with the SOP.

“It will be good if we can open up to other safe countries and attract tourists not just from Singapore but other Asean countries,” he said.

Among the proposals presented included a tax break between five and 10 years for foreign direct investments (FDI) and local reinvestments. Banks spearheaded by Bank Negara to provide soft loans with low interest to further boost spending and stimulate the economy, said Chua.

He proposed a drive to buy local products that were subsidised by the government.

The Malaysian Association of Tour and Travel Agents (MATTA) president Datuk Tan Kok Liang also concurred, saying that Asean countries including Vietnam and Thailand, contributed to more than 75% of the total foreign arrivals to Malaysia.

“I think we can start slowly by allowing essential business travel, followed by medical tourism and perhaps education and lastly for leisure.

“Domestic tourism is insufficient to support the tourism ecosystem.

“It is high time for the government to allow such a move but at the same time it must be reciprocal,” added Tan.

Malaysia, he noted, had been recognised as among the five nations in the world to have succeeded in controlling the spread of Covid-19.

“This will be a good marketing point for us, and our cases remain low,” he said.

“I believe that local tourism industry players were prepared to implement the necessary health and safety protocols for local and international tourists,” he said.

SME Association of Malaysia president Datuk Michael Kang said it was definitely the best time for the government to reconsider easing up border restrictions with countries that are deemed safe.

“For businesses, it is vital for us to travel to get new business deals, investments and acquire expertise.

“A lot of our business dealings are also in Vietnam and Thailand.

“And of course, our members have already set up their businesses in those countries,” noted Kang.

Transport Minister Datuk Seri Dr Wee Ka Siong said that Malaysia’s opening up of its borders will help in the recovery of the public transportation and aviation sector.

He said Wisma Putra was in discussions with several countries around the region to allow their citizens to travel to Malaysia.

“It is important for Malaysia and Singapore to have a reciprocal agreement with one another that will ensure citizens from both countries do not have to go through the mandatory 14-day quarantine when they travel to both countries,” said Dr Wee.

Meanwhile, Singapore had said that it was prepared to work with Malaysia in addressing the needs of cross-border travellers, amid the Covid-19 situation.

The republic’s Ministry of Foreign Affairs said this in response to media queries on Malaysia’s proposal to lift border restrictions between Singapore and Malaysia.

“Such bilateral arrangements would have to include mutually agreed public health protocols, to preserve public health and safety of citizens on both sides.

“Both countries will require some time to work out the details on the gradual easing of border restrictions to ensure a stable recovery from the Covid-19 situation,” the ministry’s spokesman said. 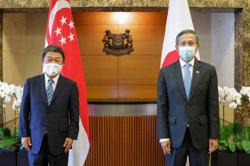