PETALING JAYA: Politicians from both sides of the political divide have expressed concern over former deputy women, family and community development minister Hannah Yeoh being summoned for questioning by Bukit Aman over a Twitter post.

Umno's Datuk Seri Azalina Othman Said said the authorities’ questioning of Yeoh sets a bad precedent as it leads to other leaders being questioned by the authorities simply for expressing their views on social media.

“It’s a bad precedent and opens ‘unnecessary’ floodgates to question MPs or assemblymen for expressing their views on Twitter, ” she tweeted Wednesday (June 17).

On Tuesday (June 16), Yeoh said she was summoned for questioning over a tweet in March asking her successor, Siti Zailah Mohd Yusoff, who is Rantau Panjang MP of PAS, about the future of the national road map to end child marriage.

Yeoh's former boss in the ministry, former deputy prime minister Datuk Seri Dr Wan Azizah Wan Ismail, also came to her defence, saying that there is nothing wrong for the Segambut MP to raise questions regarding the National Strategic Plan to Address Causes of Underage Marriage, as it was launched by the former Pakatan Harapan government on Jan 16.

The road map outlines seven objectives, 17 strategies, and 58 programmes and actions to address the causes of child marriage in Malaysia.

Dr Wan Azizah said there were challenges in finding a solution to this issue because matters concerning Muslim marriages fall under the purview of the state government.

“Therefore, is it wrong for Yeoh as the former deputy minister who drafted the strategic plan to ask Siti Zailah about the status and progress of the plan, since Kelantan is also a state that rejects efforts to increase the age limit of marrying?

“I urge the authorities to be fair and I want to remind Putrajaya not to politically intimidate any lawmakers who are doing their duty in raising people's issues, ” she added.

Penang assemblyman Syerleena Abdul Rashid said that with the absence of a proper Parliamentary session, Yeoh had expressed her concern through Twitter.

“The issue of minority marriage not only involves Muslims but also non-Muslims, ” she said.

The issue, said Syerleena, is of national importance and deserves attention.

“The future of many underage girls depends on the government’s approach to addressing this issue, ” she said.

Yeoh is currently being investigated under Section 505 of the Penal Code and Section 233 of the Communications and Multimedia Act 1998.

The first law pertains to statements conducing to public mischief while the second pertains to improper use of network facilities. 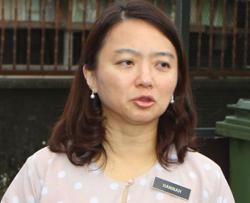