KUALA LUMPUR: Former chief secretary to the government, Tan Sri Dr Ali Hamsa, denies pressuring for amendments to be made to the audit report on 1Malaysia Development Bhd (1MDB).

Ali said a meeting which he called for on Feb 24,2016, involving the National Audit Department, the Attorney General's Chambers and 1MDB reportedly to discuss amendments to the report, took place in a friendly manner.

He, however, agreed with Shafee's suggestion that the meeting was called to expunge several issues, among which was the existence of two conflicting 1MDB financial statements for the year 2014 and regarding the presence of fugitive businessman Low Taek Jho, also known as Jho Low, at a 1MDB meeting.

The court had earlier heard that Jho Low had no official position in the company.

To another question, Ali said after the meeting, Ambrin appeared normal and was not upset and it was he (Ali) himself who sent Ambrin to the door.

He said Ambrin was his usual self and did not appear pressured.

The court had previously heard from another witness, audit director Nor Salwani Muhammad, that her boss Ambrin appeared upset after the meeting with what had transpired during the discussion.

Arul Kanda is charged with abetting Najib at the same place and time.

1MDB: Goldman Sachs trying to get out of pleading guilty, NYT reports 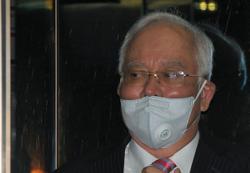