By RAHIMY RAHIM and MOHD FARHAAN SHAH And R. SEKARAN PETALING JAYA: Temples and gurdwaras across the country will start reopening this weekend while churches have applied to resume services.

There are, however, some houses of worship which prefer to remain closed for now.

He said Hindu temples would operate only on Friday and Saturday, from 6pm to 9pm.

Malaysian Gurdwaras Council president Jagir Singh said the eight gurdwaras which received the go-ahead to reopen would only do so this Sunday.

The operation hours for the gurdwaras would be from 7am to 2pm, he added.

On May 28, a special ministerial meeting had given the green light for 174 non-Muslim places of worship to reopen under strict SOP from June 10.

Catholic Metropolitan Archdiocese of Kuala Lumpur said none of the Catholic churches had reopened since the recovery MCO began on Wednesday.

“Of the three churches given the green light to reopen by the authorities, only the Church of St John Vianney, Tampin (Negri Sembilan), may reopen this Sunday.

“The church community has formed a task force to educate churchgoers and enforce the guidelines in line with the government’s SOP,” it said in a statement yesterday.

“More than 300 churches and many more from other religious communities in the country have applied,” he said in a brief text message when contacted.

In Johor Baru, State Unity, Trade and Consumer Affairs committee chairman Dr Chong Fat Full said starting from Wednesday, four houses of worship in green zones had been allowed to reopen its doors to the public.

Apart from the strict SOP that included social distancing, compulsory use of face masks and ensuring ample hand sanitisers, these premises would also have to follow the rule of allowing up to 30 people only at one time, and should undergo disinfection twice a day, said Dr Chong.

In George Town, several places of worship, especially temples, are set to reopen today but churches in the state remain closed for now.

MK Veerapathiran, chairman of Arulmigu Kamachi Amman Temple in Datuk Keramat Road here, said the temple had put the SOP in place to open today from 7pm to 9pm.

“It’s good news because we can’t keep the temple closed indefinitely as there were many functions that were disrupted because of the MCO.

“While it will be difficult to accommodate everyone within a two-hour period on Friday and Saturday, we will still follow the SOP strictly.”

Sri Veeramakaliamman Temple in Gelugor will also open its doors today to allow devotees to pray at the temple and, similarly, under strict SOP.

“We will not allow children below 12 within the temple compounds; they will have to wait outside accompanied by a parent,” temple secretary Ramajayam Krishnan said.

However, the famous Nattukotai Chettiar Temple in Waterfall Road, which runs the silver chariot during Thaipusam, will remain closed as it said it was unable to carry out the stringent SOP.

“There are several deities in the temple and many who come here are above 70 years old and it is not practical to have markings (for social distancing) as devotees tend to move around within the temple.

“Although we have the approval to open, we will wait until the MCO is completely lifted before opening our doors,” said temple trustee Dr A. Narayanan.

Churches in the state have decided to remain closed, heeding the advice of the CCM and Association of Indian Churches Fellowship (AICF).

CCM had on May 21 written to all churches to remain closed during the MCO and advised churches to conduct online streaming of worship and services.

AICF vice-president Rev Dr Dawid Barnabas said churches in Penang had also decided not to open, taking into consideration the health and safety of its members.

“We will wait until the MCO is lifted,” he said. 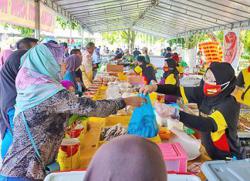