MIRI: A 48-door longhouse was saved from being razed to the ground thanks to the quick action of a group of voluntary community firefighters in the Sebuyau District in central Sarawak.

"A fire happened in one of the housing units at around 10pm on Monday (June 1) and the Sg Buluh Community Voluntary Firefighting Unit was alerted, ” said the Sarawak Fire and Rescue Department in an update Tuesday (June 2).

The department added that 10 volunteer firefighters were deployed to the longhouse and they prevented the fire from spreading using fire extinguishers.

It said that the Asajaya Bomba Station deployed a team to check on the safety of the longhouse after the voluntary firefighters had doused the fire.

“The voluntary unit did a good job and there were no more fire threats, ” said the department.

The cause of the fire is still being probed. 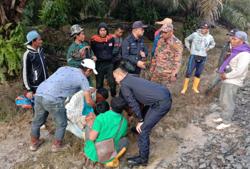 Firefighters battle blaze on navy ship at San Diego base