PETALING JAYA: Miss Universe Malaysia Organisation (Mumo) has distanced itself from the controversial remarks made by one its former winners, Samantha Katie James, in relation to the anti-racism protests in the United States of America.

Mumo said the remarks on social media made by the Miss Universe Malaysia 2017 winner were "inappropriate, offensive, unacceptable and hurtful".

"The views expressed on James' personal Instagram account are her own personal views, and are neither the view nor position of Mumo," it said in a statement on Monday (June 1).

It added that James was not contracted to Mumo nor had she represented the organisation since June 2018.

"Mumo stands for a non-racial society and strongly condemns all acts of racism and prejudice anywhere in the world," it said.

James, a model who is of Chinese and Brazilian parentage, posted several Instastories believed to be linked to the protests in the US, which were triggered by the death of African American George Floyd.

In one post, James wrote: "I don't live in America, it has nothing to do with me, but to me, it seems like the 'whites' won.

In a separate Instagram story, she posted,"To the black people, Relax, take it as a challenge, makes you stronger.

"You chose to be born as a 'coloured' person in America for a reason. To learn a certain lesson.

"Accept it as it is, till now hunger and poverty still exists. It is what it is. It is inevitable. Best you can do is remain claim, protect heart, don't allow it to crumble (sic). That's your responsibility."

James' Instagram stories were posted on Facebook and Twitter, following which many condemned her, saying her comments were condescending and "lacks the understanding of the world at large".

A check on Wikipedia showed that her entry had been edited several times after her posts on social media. 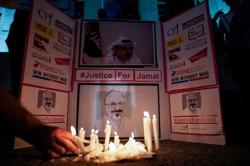 Covid-19: Khairy opts out of Pfizer vaccine, says will take whatever NPRA approves next to boost confidence
Covid-19: CoronaVac vaccine to undergo evaluation, bottling assessment process before getting approval, says KJ
Covid-19: First batch of CoronaVac vaccine arrives at KLIA
Man who rammed into cars in Sungai Buloh nabbed
INTERACTIVE: In the midst of the pandemic, many Malaysians are falling out of the labour force
The app for getting immunised
All smiles behind face masks at mass wedding ceremony
The heat is on – till mid-March
No to compulsory vaccine passport for domestic use
Alex Yeow brings vast experience as Star Media Group CEO