Cautious eating: Yeoh eating at the coffee shop which had installed acrylic compartments to allow four people to dine at one table near Taman Pekaka in Sungai Dua, Penang.

GEORGE TOWN: Families can now dine-in with peace of mind at a coffee shop in Taman Pekaka, which has set up acrylic screens to allow four people to dine on each table.

Factory worker Lim Swee Hoon, 42, and her husband, Sim Choo Liang, 44, who is self-employed, said it was a pleasant surprise to see a coffee shop take the extra step to put up such measures.

“We have not seen any coffee shop allowing more than four people per table so far and this is a pleasant change. Now, people can come in and sit with their families instead of ordering takeaways, ” said Lim when met at the coffee shop in Sungai Dua yesterday.

She said as it was just both of them at home, they were fine with eating anywhere since most places allowed two at a table.

“But many of my friends and family members have bigger families and this could be a pleasant change for them after eating takeaways at home for so long, ” she said.

“Hopefully, we can see more of this as we adapt to the new normal.”

Another diner, Dennis Yeoh, 31, who is a distributor, said it was a creative way to ensure physical distancing while allowing people to dine with peace of mind.

“I think it is a great way to reduce plastic usage too as we tend to use more plastic when we pack food home, ” he said.

“Since the movement control order (MCO) began, I think many of us have been eating off plastic containers or paper boxes.

“This is definitely a nice way to encourage families to dine in and use less plastics, ” he added.

Coffee shop owner Teong Wai Loon, 43, who set up the acrylic screens on May 18, said he wanted to allow more people to dine at one table.

“I spent over RM3,000 to install these compartments and I had them custom-made by a factory in Jawi.

“Although there is extra work following the installation of the screens such as double cleaning work and time spent to sanitise, I think it allows people to eat with peace of mind, ” he said.

He said while some people would love it, others would think it was troublesome as the screens only allowed more diners at a table but did not allow more dishes to be placed on the table for sharing.

“This is in the case of families or friends who like to order many dishes at once to share, ” he said.

“But anyhow, we need to think about life after the MCO collectively so I took up the idea after watching Wuhan restaurants do this to allow more diners at a single table.” 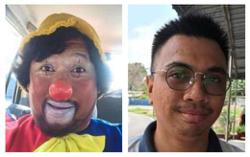