The Defence Minister added that out of 169 compounds issued by police on Saturday (May 30), 144 were at roadblocks for those flouting the interstate travel restrictions under the movement control order (MCO).

"Perak recorded the highest number of cases with 42 while Selangor, Penang and Johor recorded 32 each.

"It looks like there are still those trying to travel interstate on the seventh and eighth day of Hari Raya festivities.

"I hope the public will heed the conditional MCO regulations to avoid being compounded," he said during a press conference Sunday (May 31).

He said police had also detained and remanded 157 individuals for breaching the conditional MCO with another released on police bail.

He added that police had also issued compounds to 457 individuals for various offences under the conditional MCO.

He said that police had set up a total of 147 roadblocks nationwide and inspected a total of 188,844 vehicles. 414 yet to go for second tests after returning from overseas, says Ismail Sabri 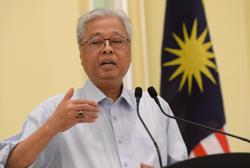