The Kuala Lumpur police chief said a team of KL Narcotics Crime Investigation Department (NCID) officers detained a 54-year-old woman at a condominium in Pudu Ulu here on May 26 and seized 103.5g of methamphetamine.

"Furher investigations led police to another unit at the same condominium, where two women and a man were detained.

The drugs seized could have supplied 600 drug users, he added.

In another operation, a man and a woman were detained following a raid at a condominium unit in Taman Tenaga here.

"The man detained has six past police records, and both suspects tested positive for methamphetamine," Comm Mazlan said.

The drugs seized could have supplied 2,780 drug users, he added.

Comm Mazlan said the drugs seized from both raids were worth a total of RM935,150, and police also seized assets belonging to the suspects, including a four-wheel drive and RM20,240 cash.

"Initial investigations found that both groups were supplying drugs for the local market in the Klang Valley, he added. 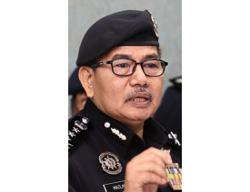 Five held, RM1mil in drugs seized in series of raids