PETALING JAYA: About two-thirds of Malaysian businesses say they had no income throughout the movement control order (MCO) period, a survey shows.

According to an online survey by the Department of Statistics Malaysia (DOSM), 67.8% of businesses which took part in the survey said they had not brought in any income during the MCO. 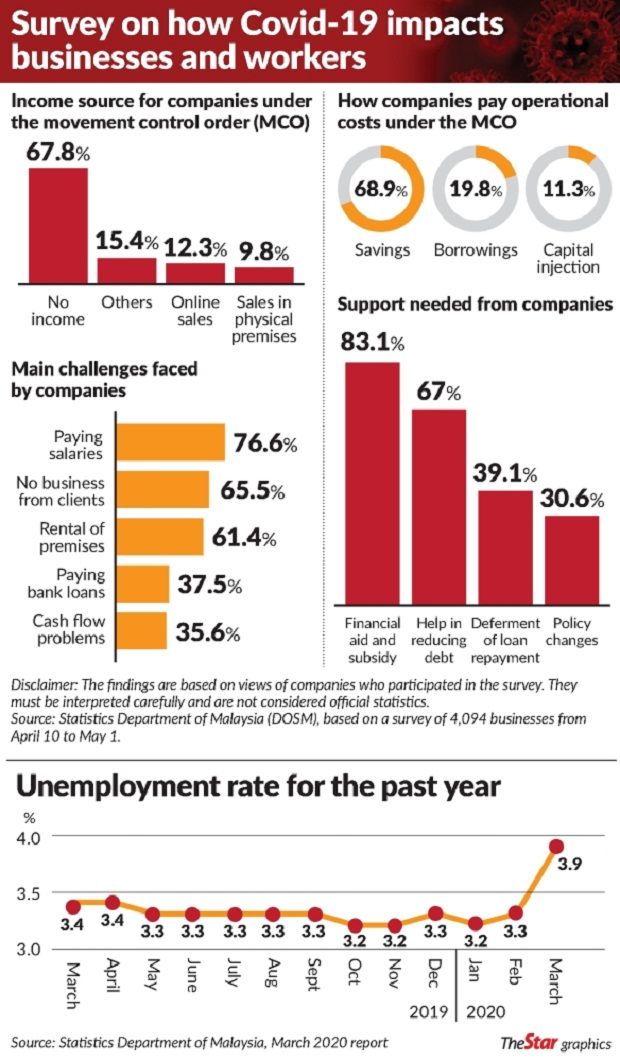 “Some 12.3% of companies still earn some income through online sales and services, while another 9.8% were earning income from sales in physical premises and stores,” DOSM said in a statement yesterday.

Two-thirds of the respondents (68.9%) also reported having to fork out their own savings to pay operational costs during the MCO.

Another 19.8% used mainly borrowings, while another 11.3% had to use capital injection.

However, 83.1% of them still reported needing financial aid and subsidies from the government.

The biggest challenge faced by businesses is paying wages (76.6%), followed by the lack of business from clients (65.5%).

More than half of the respondents (53.4%) said they were only able to last another one or two months, should they have to offer paid leave facilities to its workers during the MCO.

Another 42.5% of the respondents estimated that they would need more than six months to recover, while 28.7% estimated needing between four and six months.

“In contrast, 1.9% of businesses said they will not recover and expect that they will have to shut down,” DOSM said.

It was conducted online by DOSM from April 10 to May 1.

DOSM said however that the findings were not considered official statistics and must be interpreted carefully, though they were useful indicators of the current economic climate.

It also said that Malaysia had seen a surge in unemployment since a decade ago.

The highest unemployment rate in the country ever recorded was at 7.4% in 1986, said DOSM.

The working population in March 2020 was 15.23 million persons, out of which 2.81 million people were self-employed workers, which included traders in markets and freelancers.

“This group of workers was exposed to the risk of unemployment and work losses that affect their income during the MCO because a portion of them was unable to work,” said Mohd Uzir.