People buying food, essentials can now be accompanied by one family member under new MCO rules

By NURBAITI HAMDAN and SARBAN SINGH 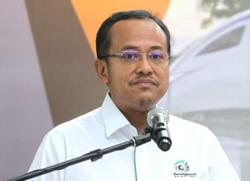 PETALING JAYA: The head of a family who is out running errands for food, medicine and other daily items can now be accompanied by another family member throughout Phase Four of the movement control order, which begins Wednesday (April 29).

According to the updated Federal Gazette, which was published Tuesday (April 28), the head of family may be accompanied by one family member staying in the same house.

The conditions for movement in seeking healthcare or medical services also allows the person to be accompanied by any other person deemed to be reasonably necessary.

The updated Prevention and Control of Infectious Diseases (Declaration of Infected Local Areas) Order 2020, which was signed by Health Minister Datuk Seri Dr Adham Baba, stated that the MCO is further extended from April 29 until May 12.

The list of essential services remains the same at 15 items.

Prior to this, individuals were not allowed to take anyone with them when buying essentials.

He also said that any Malaysian, permanent resident or expatriate returning from abroad would also be required to undergo a health examination upon arrival before proceeding to immigration clearance at any point of entry.