Police: Terengganu MB will not be charged with violating MCO

The Malay Mail reported Terengganu state police chief Datuk Roslee Chik as saying that the Attorney General's Chambers (AGC) had instructed that no further action (NFA) would be taken.

"So, they already made the decision not to charge anybody and they already (instructed) NFA for the case," he was reported as saying.

Roslee said the investigation papers from the AGC arrived at the contingent police headquarters on Tuesday (April 28), stating that no charges would be brought against the group, which also included Terengganu Umno liaison committee chairman and former mentri besar Datuk Seri Ahmad Said.

Roslee declined to comment further if on the reason behind the NFA decision.

On April 17, a picture of Ahmad Samsuri and several other men went viral on social media, claiming that he went against social distancing rules as required by the MCO.

He was seen standing together with Ahmad at the latter's home with several others.

Two days later, he had his statement taken at the Terengganu police headquarters.

Ahmad, on the other hand, explained that Ahmad Samsuri was at his home to discuss matters on aid distribution while several volunteers from the Kijal state constituency were there arranging the items to be handed out.

All of them pleaded guilty to defying the MCO by attending a lunch gathering at a tahfiz in Lenggong on April 17. 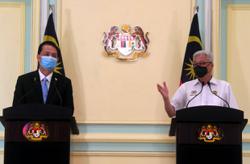