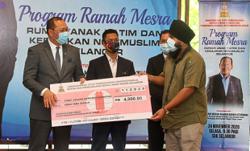 He said this included 400,000 B40 or lower-income group recipients without bank accounts and 1.2 million recipients from the M40 or middle-income group.

In his second report on the achievement of the Prihatin Rakyat Economic Stimulus Package, the minister said the B40 group received their BPN through Bank Simpanan Malaysia (BSN) counters.

“BSN counters were open to hand out the BPN to 400,000 B40 recipients who do not have bank accounts.

“I am touched by the BSN officers who were dedicated to the recipients. Some staff helped those who could not walk and others handed them mineral water, ” he said on Facebook Live yesterday.

He thanked BSN and the Inland Revenue Board for helping to distribute the BPN allowances and the police for ensuring that the recipients practise social distancing at the banks.

He also said that the government would look into the issue of those without bank accounts and those left out of the system by looking into digital solutions in the banking system in the long-term.

The BPN cash aid, meant to benefit individuals from the B40 and M40 groups, is among initiatives unveiled under the government’s Prihatin Rakyat Economic Stimulus Package following the implementation of the movement control order (MCO).

Tengku Zafrul also said that there were three million appeals and applications on BPN cash aid which were still being processed and qualified recipients could expect their payments in May.

He said the e-hailing incentive of RM500 per driver to 90,000 recipients had started to be credited into their bank accounts from April 20.

On the business front, Tengku Zafrul said that loans worth RM2.7bil to small and medium enterprises (SMEs) were approved for 5,000 SMEs under the SME Easy Loan Fund. “This is an increase of RM1.5bil for 3,000 SMEs from last week. Many people will lose their jobs if we do not assist the SMEs, ” he said.

Under the Wage Subsidy Programme, he said that there has been a five-fold increase in the number of applications from employers from last week.

“There are now 159,000 applications from employers for the wage subsidy involving nearly one million workers.

“RM1.2bil of wage subsidies have been approved and we have started crediting the accounts from last week, ” said Tengku Zafrul.

He added that RM45mil worth of loans have been approved as of April 19 to 1,500 micro-businesses.

He encouraged more micro business owners to apply for the loans to enable them to continue their businesses.

Applications for the special grant for RM3,000 loans for micro-businesses will be open on May 1.

“I hope businesses would also make full use of the Employers Advisory Services which will be handled by Employee Provident Fund (EPF) on the issue of postponing the employer contribution to EPF, ” said Tengku Zafrul.

The services will cost the government RM10mil, he said.

He also said that as of April 19,600,000 EPF contributors have decided not to make the EPF reduction of contribution from 11% to 7%, as allowed by the government due to economic effects of the MCO.