JOHOR BARU: Datuk Seri Mohamed Khaled Nordin (pic) has criticised Deputy Health Minister Datuk Dr Noor Azmi Ghazali after a picture of him having a meal with others at an event went viral on social media.

The Umno vice-president said Dr Noor Azmi, as the Deputy Health Minister, was supposed to set a good example during the movement control order (MCO).

"In other countries such as New Zealand, the health minister tendered his resignation after flouting his own country's lockdown rules.

"Others in their respective countries also showed their anger, such as (towards) the United Kingdom's housing minister as well as South Africa's communication minister, for the same reason," he said in a Facebook post here Saturday (April 18).

The former Johor mentri besar said leadership must be shown through example.

He added that Dr Noor Azmi failed to follow Muhyiddin's instructions when the rakyat was facing much difficulty abandoning their normal activities due to Covid-19.

"I understand if he went to hand out donations or necessities to the needy, but for a deputy health minister to go out and eat, this is irresponsible.

New Zealand's health minister Dr David Clark had offered his resignation after he ignored national lockdown rules twice. He was photographed going for a mountain bike ride 2km away from his home and later for driving his family 20km to a beach on the first weekend of lockdown in the country.

However, New Zealand's Prime Minister Jacinda Ardern rejected his resignation but stripped him of his associate finance minister portfolio and demoted him to the bottom of the cabinet rankings.

Dr Noor Azmi, who is Bagan Serai MP and with Parti Pribumi Bersatu Malaysia, posted on his Facebook account recently about his visit to a tahfiz school to hand out goods.

In pictures he posted, he was shown handing out goods and then having a meal together with a group of people.

The post has since been deleted, but screenshots of the post are making its rounds on social media.

MCO: Minister, deputy minister do not have immunity to flout the law, says Takiyuddin

Govt to leave it to cops to act when VIPs violate MCO, says Ismail Sabri 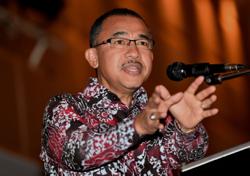