‘MCO likely to be extended’

SHAH ALAM: Five days before the second phase of the movement control order (MCO) ends, Selangor police hinted that it is likely to be further extended.

“The MCO will probably be extended. All mosque and surau will continue to be closed, ” Selangor police spokesman on Covid-19, Asst Comm Ismail Muslim, told a press conference at the state police headquarters.

“However, any official announcement will be made by the Prime Minister, ” he said yesterday.

He also reminded the public that all activities in mosques would not proceed while the MCO was still in effect.

It is widely believed that an announcement on a second extension of the MCO will be made today by Prime Minister Tan Sri Muhyiddin Yassin.

Health director-general Datuk Dr Noor Hisham Abdullah, at a press conference in Putrajaya yesterday, said a meeting would be held to discuss the issue.

The MCO started from March 18-31 before the government extended it to a second phase, from April 1-14.

Meanwhile, Selangor police have issued 24 compounds for those who breached the MCO.

“Beginning April 8, summonses started to be issued from 4pm.

“As of Thursday midnight, we have issued 16 in Serdang, seven in Gombak and one in Hulu Selangor, ” said ACP Ismail.

In other developments, a Shah Alam City Council (MBSA) councillor and three others have been charged in court with flouting the MCO to play badminton.

ACP Ismail said that all four were each fined RM1,000 and they had paid their fines to the court.

The four were arrested on April 4 after they were found playing in an MBSA hall.

ACP Ismail also said that 1,430 arrests had been made since March 18.

Of the number, 609 have been charged in court, with 254 investigation papers opened.

“In addition, the police have constructed 94 roadblocks as part of the second phase of the MCO, ” he said.

He added that the additional road closures in Petaling Jaya were made to better control movement there as well.

As of Wednesday, seven flights carrying Malaysians arrived in the country.

“A total of 246 passengers were screened, with 229 found to be negative. Three were sent to Hospital Sungai Buloh for treatment after they were found to show symptoms, ” he said.

In Penang, five people were slapped with a RM1,000 fine each for violating the MCO.

Penang police chief Comm Datuk Sahabudin Abd Manan said the compounds were issued by the police during the MCO enforcement at various locations in the state.

He said cumulatively since the MCO started, 587 people had been arrested in Penang for breaching the order.

“The compliance rate is now at 98%, ” he said during a visit to the Pasar Bisik fish market in Kepala Batas yesterday. 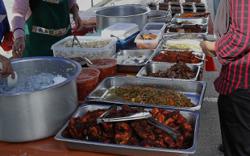