SMEs give the thumbs up

PETALING JAYA: The additional RM10bil allocation for small and medium-scale enterprises (SMEs) has received the “thumbs up” with several key players saying the government’s measures will help tide them over the Covid-19 economic crisis.

He said the revised categories for the wage subsidies would be a “timely financial relief” to employers.

“We strongly believe that the government will continue to engage with businesses, to review the policy actions from time to time and make pragmatic decisions,” he said, adding that talks between employers and employees on pay cuts and unpaid leave was much welcome during this period.

SME Association of Malaysia president Datuk Michael Kang said the government covered almost every angle with the additional package which was greatly welcomed by the SME community.

“The increase in wage subsidies is what we were looking at. The special grant is also something that will help a lot of our members with their cash flow,” he said, adding that the plea for a tax holiday was not given but hoped that the government would reconsider it.

Kang said the body was looking forward to another meeting with the government to appeal for SMEs to be allowed to run their businesses with minimised operation, especially exporters.

“A lot of us are facing cancelled orders and penalties because we cannot ship out goods. We hope the government can reconsider because we are part of the international supply chain,” Kang said.

Malaysia Retail Chain Association president Datuk Seri Garry Chua described the latest stimulus as “much, much better” and a “big improvement” from the previous package.

He said the the new stimulus was mainly geared towards micro enterprises, adding that bigger companies with a large workforce would still find it a struggle to keep afloat.

“Obtaining rental waivers from building owners in the private sector will remain difficult, even with the tax deductions the government is offering,” said Chua.

Federation of Malaysian Manufac-turers (FMM) president Tan Sri Soh Thian Lai said the RM7.9bil increa-sed allocation towards the Wage Subsidy Programme, which now stands at RM13.8bil, exceeded the RM12bil that FMM proposed in its appeal to the government following the announcement of the Prihatin Rakyat Economic Stimulus Package.

“We also note that the limit on numbers eligible for the wage subsidy has been increased for the large companies, from 100 to 200 per company now.

“However, we had hoped that the condition on a 50% reduction in revenue in order to qualify for the wage subsidy would have been removed as well as the ceiling of RM4,000,” he added.

Soh said while the moratoriums with regard to administrative dealings with the Companies Commission of Malaysia was a relief, FMM wanted a further waiver of interest for a moratorium period of six months.

“FMM also recommends that the moratorium be extended to trade facilities, overdraft and leasing,” he added.

Malay Chamber of Commerce Malaysia acting president Datuk Fauzi Hassan said most SMEs had no income during the MCO but still had payments to make.

He urged the government to allow leeway for businesses to resume operations to ensure that they could survive the tough economic period. Building resilience for SMEs and entrepreneurs 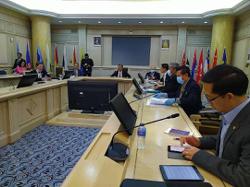