PETALING JAYA: Despite being applauded by the public as a "national hero", Health director-general Datuk Dr Noor Hisham Abdullah (pic) has downplayed his role, saying that it all boils down to teamwork.

He said it took a "team effort" to tackle the Covid-19 pandemic, which has so far seen a total of 2,470 positive cases and 34 deaths in the country.

"It's not about me. It is what we can do together as one.

"What we can do for Covid-19 (situation). What is important is our service," he said this during a press conference in Putrajaya on Sunday (March 29).

At the time of writing, a 21-second clip Tweeted by Bernama has been viewed over 62,000 times and retweeted 2,800 times.

Many have commented on the tweet and other Covid-19-related social media posts with Dr Noor Hisham, with plaudits pouring in on the good work done by both him and the health ministry so far.

Dr Noor Hisham, who has served under three Health Ministers, has given the majority of the daily press conferences to update the public on the Covid-19 situation in Malaysia. 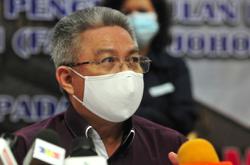