KOTA KINABALU: Twelve Sabahans who were in Sulawesi, Indonesia for a tabligh gathering, were taken straight to quarantine and tested for Covid-19 when they arrived home.

The 12 men were believed to have arrived in Tawau on Saturday (March 21) evening.

According to sources, security forces including marine police and Malaysia Maritime Enforcement Agency, among others, escorted them back to Tawau via sea routes.

The source said they had received information that the group was planning to come back after reaching Sg Pancang Pulau Sebatik, Indonesia from Sulawesi at about 9.50am the same day. 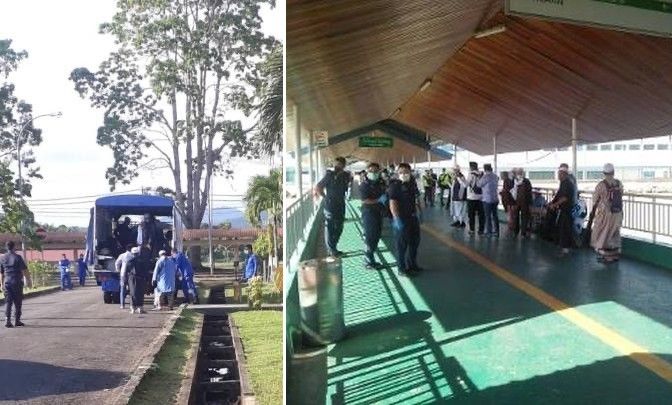 Police and health officials taking the Sabahans who returned from Indonesia to be quarantined in Tawau.

"Our forces went to the island to check on the information and brought them back," the source said.

They had planned to attend the Ijtima Asia 2020 function earlier this week, which was cancelled by the Indonesian government in view of the worsening Covid-19 situation.

The group then decided to return to Sabah via sea routes.

Earlier, state secretary Datuk Safar Untong said all those who wanted to return from Sulawesi would be barred from entering the state.

The restriction was effective for 14 days starting March 21, he said.