KUALA LUMPUR (Bernama): Above the din and bustle of the Selangor wholesale market in Seri Kembangan, one woman stands out. Dressed stylishly in a black hijab and matching long top, short cardigan and long pants and sporting a pair of trendy earrings and boots, she seems a little out of place there.

But traders and regulars at the market know that Nurul Ain Alias, 36, is more than mere eye candy. For the past year, this mother-of-four has been operating a fish stall at the market - the only woman among the dozens of fishmongers there - and her skill at gutting and scaling the fish, no matter their size, leaves everyone amazed.

And, she is a graduate to boot. Nurul Ain, who has a degree in mass communication from a local university, worked in the public and private sectors for 10 years before she took over her father’s fish stall at the market.

"I was used to dressing up nicely to go to the office, so when I started to work in the market, I didn’t like the idea of wearing an old T-shirt, jeans and black rubber boots every day. Well, I traded my jacket for a cardigan and instead of wearing high heels I now wear boots.

Initially, fellow traders and marketgoers were a little shocked to see her all dressed up but now they are used to it.

"In fact, sometimes I get requests from some of the women here to teach them to wear the tudung in different styles, the way I do, ” she said.

Her boots are also attention grabbers and she has a collection of them in colours like pink, blue and red with floral, abstract and geometrical motifs.

FROM PRO TO FISHMONGER

Although Nurul Ain’s father had been operating his fish stall at the Selangor Wholesale Market for 20 years, not once did it cross her mind that she may take over his business someday.

She said after the company she worked for as a public relations officer terminated her employment as part of a staff lay-off in December 2018, she looked for a new job. 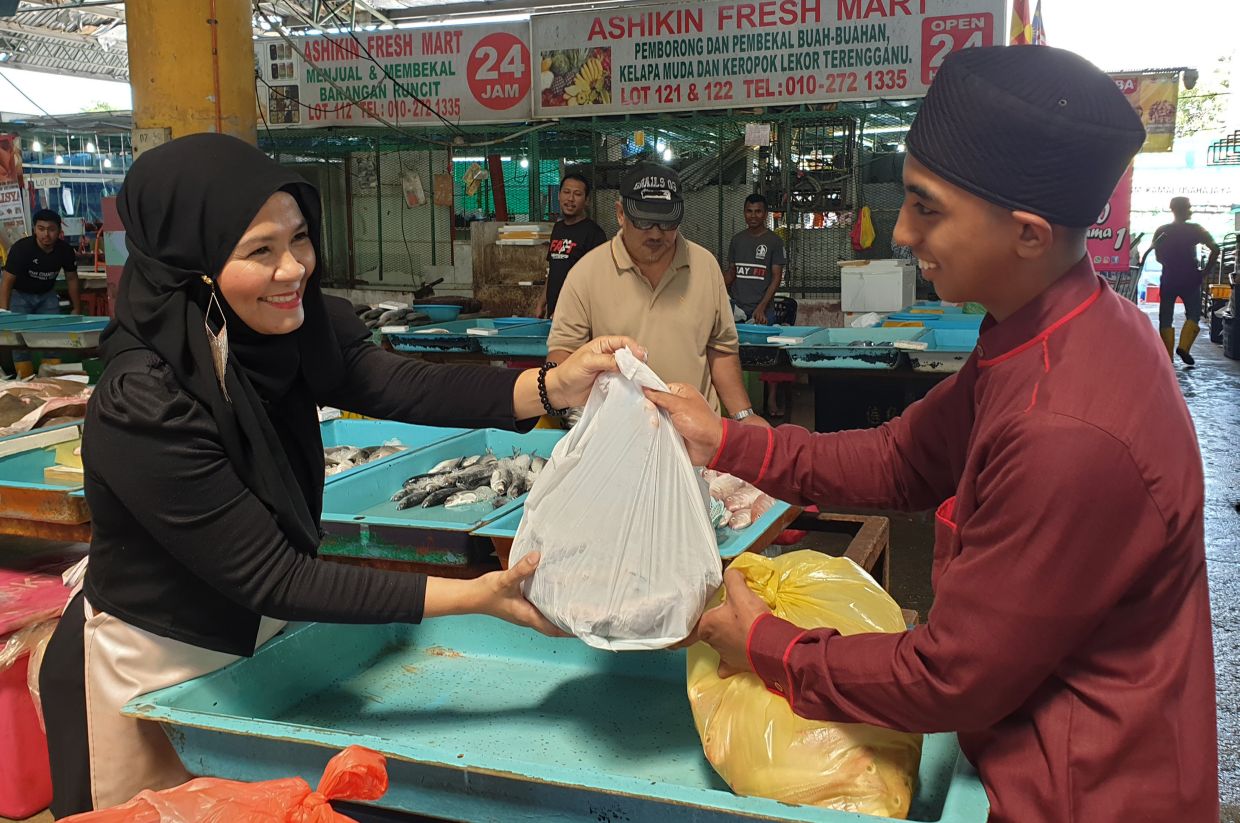 "He suggested that I take over the stall in Seri Kembangan as the operating hours are from 7am to 1pm, which leaves me with enough time to take care of my family. The Selayang market operates from 11pm to 5am, which is not so suitable for women, ” she said.

The prospect of taking over her father’s business did not daunt her as she was involved in businesses such as selling nasi lemak, albeit on a small-scale, since her school days.

And, added Nurul Ain, she did not in the least feel awkward about operating a fish stall in the market.

"In fact, I feel empowered because it’s not easy for a woman to be a fish trader, ” she said.

In the first few months, however, she struggled to manage the stall and attend to her customers and almost gave up but persevered after she thought of her children and their future.

"I may be well dressed and have a worker to help me, but still I do all the work, such as lifting all those crates of fish, some of which can weigh up to 50kg each. Cleaning and scaling the fish is actually a very tough job as well.”

The task of gutting and scaling the fish is not as easy as it looks and to do a good job of it, one needs to know the right techniques, according to Nurul Ain.

Small fish like kembung and cencaru are easy to clean and cut but the bigger ones like jenahak, merah and siakap that weigh more than four kg each require special skills, failing which they will end up getting ‘mauled’.

"To tell the truth, cleaning a large-sized fish is like going to the battlefield as you need to have a lot of energy and physical strength. The first time I tried to clean a big fish, my customer had to help me! And, a few traders told me the work was not suitable for me. 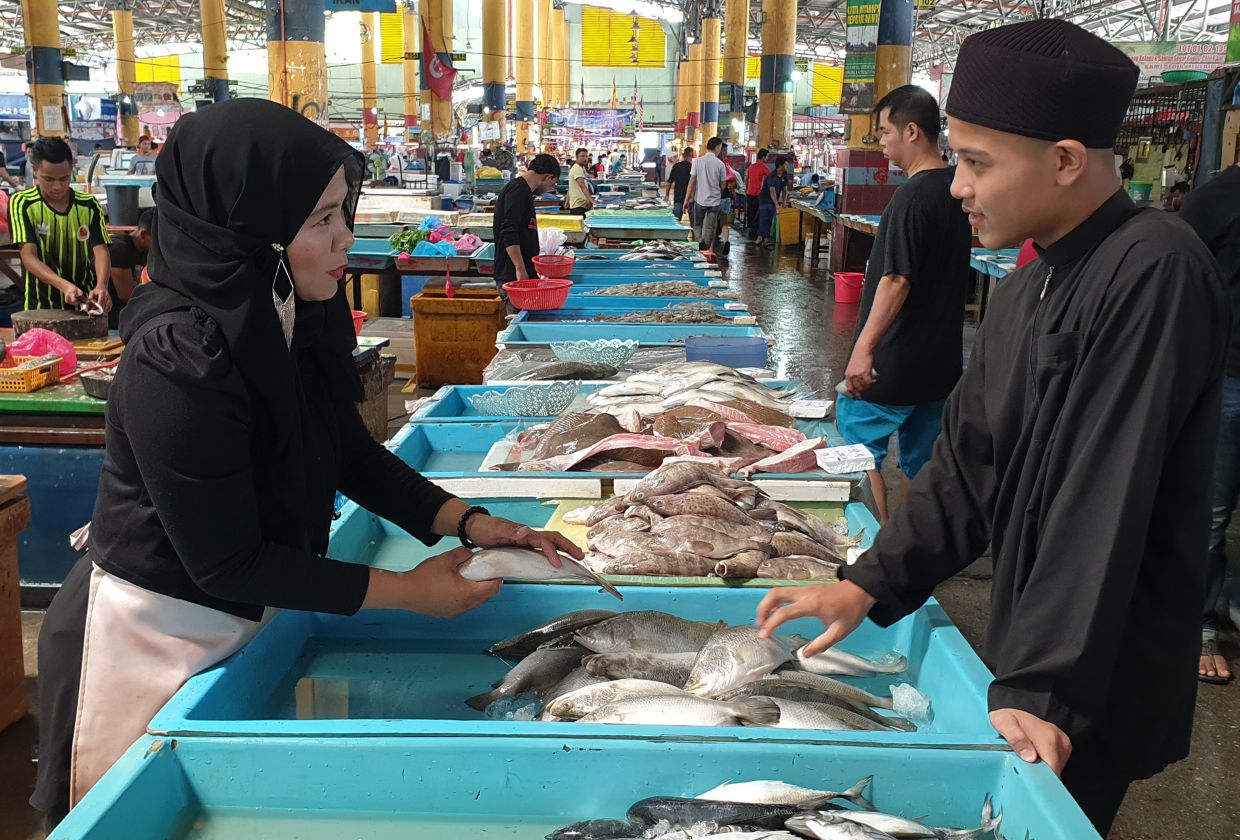 "But I didn’t give up, ” she said, adding that it used to take her 15 to 20 minutes to clean a large-sized fish but now she can do it in three minutes.

Nurul Ain said she has no intention of giving up her fish stall and pursuing another career as the earnings from her business has helped her to perform charitable deeds. Daily, she would donate fresh fish and sundry goods to various orphanages in the Klang Valley.

"Some people tend to look down on my work but I’m grateful for having this business as it has given me the opportunity to help the needy, which I was not able to do previously as my salary was not that high, ” she said.- Bernama