The fire broke out on Sunday (March 15) at 11.18pm, with the Fire and Rescue department deploying a total of nine vehicles and 42 personnel from the Sungai Rengit, Sebana Cove, Penawar, Pasir Gudang and Larkin Fire Departments.

Johor Senior Assistant Fire Commander Abdul Rahman Azezulkifle in a statement said that the operation, as of 11.15am on Monday (March 16), is still ongoing.

"We have recorded a total of seven victims, with one escaping safely, another suffering burns up to 70%, four confirmed dead and one missing," he said.

The missing victim was later found dead, bring the number of fatalities to five.

The cause of the fire is still under investigation. 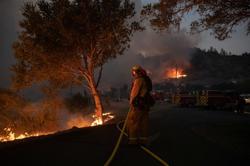