In a sting operation on Friday, enforcement officers from the Peninsular Malaysia Forestry Department found a large-scale operation underway with the capacity to produce millions of ringgit’s worth of oil.

The activities were being undertaken by a 65-year-old man and his 23-year-old son.“We were shocked to find 102 stoves with the capacity to extract agarwood oil,” the department’s forest enforcement division director Mohd Rahim Ramli said yesterday.

The 60-strong enforcement team also raided a house used to store raw agarwood for the factory’s operations. The joint operation with the police was conducted after a month of surveillance.

The factory was understood to have been in operation for more than 15 years.

The two suspects were handed over to the police, while the factory and house were impounded.

Mohd Rahim said the raw agarwood, oil and appliances in the factory, were estimated to be worth RM2mil.

He said they would need time to grade the oil and investigate the two suspects under the National Forestry Act and related laws.

“They admitted that the oil is marketed to Singapore and then to the Middle East,” he added.

The agarwood tree, also known by its scientific name Aquilaria Malaccensis, is an endangered species listed in the relevant schedule under the International Trade in Endangered Species Act.

Its extract is highly valued in the cosmetics and perfume sectors. — Bernama 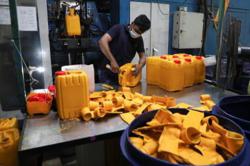