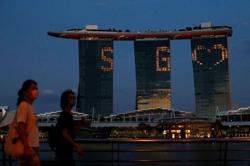 PETALING JAYA: It was his daughter Marina’s pleas that got interim Prime Minister Tun Dr Mahathir Mohamad back to the discussion table with Pakatan Harapan leaders to hammer out a compromise, according to a media report.

Quoting a source, The Malaysian Insight (TMI) reported that Pakatan leaders had reached out to Datin Paduka Marina Mahathir (pic) to get a short meeting.

Dr Mahathir “relented to his daughter Marina Mahathir’s request to meet the remaining parties in his collapsed government, ” the news portal said.

“It took a few phone calls and text messages, but finally Marina managed to get her father around to speaking to Pakatan leaders, ” TMI reported.

All this took place late last night or the wee hours of this morning, and earlier Saturday (Feb 29), Pakatan declared it would throw in its full support behind Dr Mahathir as Prime Minister.

“Pakatan is against any attempt at a backdoor government, especially those involving kleptocrats and traitors to the cause, which will destroy all efforts at reformation that has been carried out up till now.

"Thus, to carry on with our fight, Pakatan has expressed full support behind Tun Dr Mahathir Mohamad as candidate for Prime Minister.

“Pakatan holds true to the principle and will continue to fight for our manifesto in government, ” the coalition said.