Azharuddin, who was the former Civil Association Department (now Civil Aviation Authority of Malaysia) director-general back when the plane went missing in 2014, also said that Abbott was reopening wounds of families and friends of those who went missing as the tragedy remained a mystery.

"The theory of mass murder-suicide was one of the theories but it has yet to be proven.

"I met Abbott during the course of MH370 investigations but I have never confirmed such theories nor spoken to him personally.

"He claimed the top leadership in Malaysia then told him so – ask him who are those people are. I am surprised he is raising this theory now – for what purpose, I do not know," said Azharuddin, who was also the chairman of the MH370 High-Level Technical Task Force (HLTTF).

He was asked to comment on Abbott's claims by that Malaysia's top leadership, from the outset, considered the disappearance of Malaysia Airlines Flight 370 in 2014 as a mass murder-suicide by the pilot.

Abbott was Australia's prime minister at the time the plane went missing.

"My very clear understanding from the very top levels of the Malaysian government is that from very, very early on here they thought it was a murder-suicide by the pilot," Abbott had said in a clip from a documentary airing on Wednesday (Feb 19) on Sky News.

Abbott declined to name any individuals to support his claim. 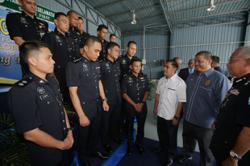