KUALA LUMPUR: Part of a high-rise apartment that was still under construction in Taman Desa here collapsed.

According to a statement by the Kuala Lumpur Fire and Rescue Department, teams from the Seputeh, Pantai and Hang Tuah fire stations were deployed, with a total of around 50 firefighters and officers.

“The building collapse started on the sixth floor, and the rubble is being supported on the first floor.

“Both victims have been rescued and have been sent to the hospital for medical treatment.”

KL mayor Datuk Nor Hisham Ahmad Dahlan has confirmed that a stop-work order has been issued, effective immediately.

The building’s developer, Maxim Holdings, has confirmed the incident on the apartment’s Facebook page, adding that its cause would be investigated. 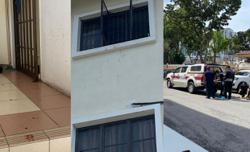