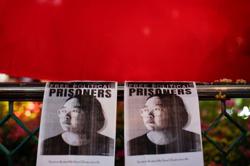 SEREMBAN: A 48-year-old father claimed trial in the Sessions Court here to seven counts of committing incest with his daughter over a period of four years, starting when she was barely 12.

The accused, a rubber tapper, pleaded not guilty before judge Junaidah Mohd Isa after the charges were read to him by an interpreter.He allegedly committed the offences at a house in Gemencheh near Tampin between Dec 28, 2015 and Dec 24, 2019.

He was charged under Section 376B of the Penal Code for rape and could be jailed for between 10 and 30 years and whipped if convicted.

Deputy Public Prosecutor Nurhafiza Haron urged the court not to grant bail as the accused is the victim’s father.

The man told Junaidah that his relatives were present in court to post bail.

She allowed the man to be released on RM10,000 bail in one surety and warned him not to contact the victim, who is now living with her mother.

The accused was also ordered to report to the Air Kuning Selatan police station in Gemencheh every month pending disposal of the case.

Junaidah fixed March 12 for remention to let the prosecution obtain the victim’s medical report and for the accused to appoint a lawyer.Police detained the man on Saturday after the victim lodged a report.

In an unrelated case, a 24-year-old despatch rider pleaded not guilty before Junaidah to a charge of sexually grooming his 13-year-old niece.He allegedly committed the offence by showing a nude picture to his niece at his house in Gemas at 4.30pm on Nov 26 last year.

He was charged under Section 12 (1) of the Sexual Offences Against Children Act 2017 and faces up to three years in jail upon conviction.

DPP Nurhafiza asked the court not to allow bail but the accused pleaded, saying his father was present to bail him.

Junaidah set bail at RM6,500 in one surety and warned the accused to stay away from the victim. The court fixed March 12 for re-mention.