Anwar: Give priority to economy

SHAH ALAM: The focus of the country must be towards strengthening its ailing economy, as opposed to playing political games, says Parti Keadilan Rakyat (PKR) president Datuk Seri Anwar Ibrahim.

“People are having problems and struggling to have a decent livelihood. This must be the priority for the government right now.

“I have said this to the prime minister in private, and I appreciate that he accepts the fact that the whole focus of the government must be the economy,” said Anwar to reporters after delivering a keynote address at the Regional Conference on Peaceful Coexistence 2020 here yesterday. In view of his statement, Anwar added that he was not perturbed by attempts by the Opposition to create problems within Pakatan Harapan.

He said his main concern was to stabilise the politics of the country and to maintain focus on the national economy.

On PAS’s latest claim of wanting to throw in their support for Tun Dr Mahathir Mohamad to complete his tenure, Anwar said the act was pure gimmick.

“They went to the elections and they lost miserably. And so now they want to have another route,” he said.

However, he said Pakatan Harapan would not fall prey to the PAS agenda.

“I am in communication with the leaders and we are intact. In politics, there is treachery, there are corrupt deals, there are people who fear for their own positions, and so there are lots of dealings among political allies,” said Anwar.

When asked about allegations that MPs from PAS, Umno and even certain Pakatan parties were ganging up to prevent him from taking over as premier from Dr Mahathir, Anwar said he was not aware of such a thing.

Earlier in his keynote address, Anwar said there was a global trend currently where race and identity had become fundamental considerations.

He said “anti-others”, whether religion, race or immigration, seemed to be on the rise.

On the disqualification of DAP’s Dr Ting Tiong Choon as the Pujut assemblyman, Anwar said Ting’s citizenship was not raised in the Federal Court judgment on Tues-day.

In a 7-2 decision, the Federal Court held that the Sarawak state legislative assembly had the right to disqualify Dr Ting from office, given his (one-time) dual citizenship status, where he held both Malaysian and Australian citizenships.

“He has chosen Malaysia, and we should accept it,” Anwar said in response to calls by certain quarters for Dr Ting’s Malaysian citizenship to be rescinded.

The Sarawak Legislative Assembly had in May 2017 disqualified Dr Ting, despite him giving up his Australian citizenship a year before contesting the Sarawak state polls.

Dr Ting was said to have violated Article 17(1)(g) of the Sarawak constitution.

Anwar said he was interested in the dissenting opinions of Chief Justice Tengku Maimun Tuan Mat and Chief Judge of Sabah and Sarawak David Wong Dak Wah.“I was taken by the dissenting views of the Chief Justice and the Chief Judge of Sabah and Sarawak which, although minority, were very strong opinions,” said Anwar, adding that the two judges had made very strong points which must be taken into consideration.“Parliament must give attention to it in order to make several amendments accordingly,” he said.
Article type: metered
User Type: anonymous web
User Status:
Campaign ID: 18
Cxense type: free
User access status: 3 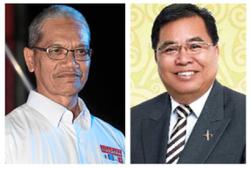 Is there fire behind the smoke? Dr M: Now is not the time