Malaysian Ambassador to China Raja Datuk Nushirwan Zainal Abidin (pic) has praised his team for the smooth and successful repatriation mission in Wuhan.

“I must say they have done a good job,” he said.

A group of 107 Malaysians and their family members who had been stranded for nearly two weeks in Hubei – the Chinese province worst hit by the novel coronavirus outbreak – arrived safely in Kuala Lumpur on Tuesday.

Relating their work since the lockdown of Wuhan city on Jan 23, Raja Nushirwan said it had been hectic with meeting after meeting and phone call after phone call.

“The longest meeting lasted over nine hours,” he said.

This, he said, was because they had to plan for any outcomes and consider all possibilities.

The embassy has only one goal – to ensure Malaysians in China are safe and they could access their assistance when needed.

An emergency response team was set up immediately to reach out to Malaysians in China, especially those in Hubei and its neighbouring provinces.

“We need to know where everyone is to help us better prepare,” Raja Nushirwan said, expressing his appreciation to Malaysians in China who helped to pass the message around.

The far-sighted plan has proven to be effective when the evacuation order came from Putrajaya on Jan 29.

The team immediately swung into action and started liaising with the Chinese government, its various agencies, as well as local authorities.

A six-man advance team from the embassy was dispatched to the epicentre of the outbreak three days later led by Minister Counsellor Samsul Kahar Kamarudin, who has experience in the Egypt evacuation mission.

“They agreed to go without any questions asked,” said Raja Nushirwan.

Raja Nushirwan said gathering the people in Wuhan was not an easy task because they were located at various places in Hubei province – half the size of Malay-sia – with one as far as 600km away.

He considered the repatriation a success as they managed to bring most of the people there home.

Asked if it was an easy negotiation, Raja Nushirwan, who was involved in the negotiation with North Korea three years ago when he was the Foreign Ministry deputy secretary-general for bilateral affairs, said it was not even a negotiation.

“I consider it merely discussions. The Chinese Foreign Affairs Ministry had been very helpful and the others also gave their cooperation,” he added.
Article type: free
User access status:

MATTA Fair deferred from March to May 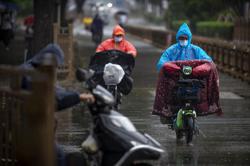