40 kidnapping cases thwarted in Sabah since 2018

Effective action: DCP Hazani said measures to enhance security by tightening control at risky routes in Lahad Datu had enabled them to detect the kidnap-for-ransom activities carried out by terrorist groups from the southern Philippines.

The Eastern Sabah Security Command (Esscom) commander said this was due to the close cooperation between the Royal Malaysia Police, Malaysian Armed Forces and the Malaysian Maritime Enforcement Agency.

DCP Hazani said measures to enhance security by tightening control at risky routes had enabled them to detect the kidnap-for-ransom activities carried out by terrorist groups from the southern Philippines.

“We have been able to foil several kidnapping attempts since 2018 because when Esscom received information, all our personnel and assets will be deployed, ” he said.

DCP Hazani said since 2000, resorts on the east coast of Sabah have been the target of kidnappers which led to the establishment of Esscom in 2013.

“Curfews were also enforced in the waters off the Esszone to prevent kidnapping while at the same time, security personnel were stationed at the resorts as these were places where abductions were likely to occur, ” he said.

On the abduction of eight Indonesian fishermen by the Abu Sayyaf group on Jan 16 which was at the same area where another three Indonesian fishermen were kidnapped in Tambisan in September, DCP Hazani said intelligence report about the matter was received but they did not expect the incident to happen during the day.

“They (kidnappers) operate near the Philippines international border so they can easily escape with the victims, ” ​​he said adding that the group was assisted by spies who track the victims and presence of the security forces.

As such he hoped the enforcement of curfews would be concentrated in the hotspot areas which serve as cross-border crime routes, among them the waters off Pulau Sipadan and Pulau Mabul in Semporna, Pulau Ligitan (Tawau) and Geem Reef (Tambisan, Lahad Datu). — Bernama 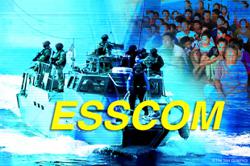