The win ensures that Barisan keeps its stranglehold on a seat that has traditionally been its stronghold in Sabah.

Former foreign minister Datuk Anifah Aman held the seat for Barisan from 2004. He retained the seat yet again in GE14 by a slim margin of just 156 votes.

However, Anifah left Umno to become an independent after Barisan lost power with Pakatan forging a new administration in Putrajaya for the first time in the nation's history.

His hold on the seat was to prove tenuous.

Warisan's Karim - a former Umno member and the Bogawan state assemblyman for five terms - filed an election petition with the Election Court challenging the result.

The court ruled in Karim's favour and nullified Anifah's win.

The by-election was then triggered when the Federal Court on Dec 2 upheld the Election Court’s ruling on Karim's petition.

Kimanis is the 10th by-election since GE14 and the fifth parliamentary seat to be contested, following Port Dickson, Cameron Highlands, Sandakan and Tanjung Piai.

Before the latest contest, only two out the nine seats were not successfully retained by the incumbent in by-elections post-GE14: Semenyih, which switched to Barisan, and Tanjung Piai, which Barisan wrestled from Pakatan with a huge 15,086-vote majority.

8.55pm: The Election Commission announces that the official turn-out for the Kimanis by-election was 79.92% at the close of polls at 5pm, higher than the predicted 70%.

7.15pm: Barisan Nasional has won the Kimanis parliamentary seat with a majority of over 1,000 votes, according to unofficial reports.

Reporters are locked on the screen as they watch the updates of the unofficial results of the by-election at Dewan Datuk Seri Panglima Haji Mohd Dun Banir, the vote-tallying centre.

Things remain calm and steady in the hall as the Election Comission (EC) staff focus on their respective tasks.

Barisan is also airing a live Facebook Umno Online reaction at their war room at Eagle Wood Garden in Bongawan, where no media entry is allowed.

6.40pm: Barisan Nasional's Datuk Mohamad Alamin has got 7,169 votes against Parti Warisan Sabah's Datuk Karim Bujang's 6,086 votes in unofficial early counts for the Kimanis by-election. This is a 1,083-vote majority.

5pm: Polling for the Kimanis by-election closed at 5pm with more then 76% of the 29,664 registered casting their ballots.Counting of votes at the various polling districts will begin immediately and the tallies will be sent to the Datuk Seri Panglima Mohd Dun Banir community centre here.The official results can be expected at 10pm.

3.38pm: Voter turnout is at 70.2% as at 3pm, surpassing EC's target of 70%. Weather has been favourable with most areas being sunny. Polling closes at 5pm.

12.46pm: EC says 50.37% voter turnout as at noon. Beaufort OCPD Deputy Supt Azmir Abd Razak said the situation so far has been quite calm. "We have yet to receive information of any major incidents," he added.

11.17am: 34-year-old triplets Zaki Muhamud, Zaidi Muhamud and Zakaria Muhamud caused a "stir" at SK Our Lady of Fatima polling station when they arrived to cast their ballots. They expressed hope that more development will be carried out in Kimanis when the new MP is elected.

9.14am: Barisan Nasional candidate Datuk Mohamad Alamin arrives at SK Our Lady of Fatima in Kampung Kelatuan to cast his ballot.

7.30am: Some 19 polling stations involving 68 channels opens for 29,619 voters eligible to vote in the Kimanis parliamentary constituency.

KIMANIS: Elderly and young voters have started streaming into polling centres for the Kimanis parliamentary by-election that opened from 7.30am on Saturday (Jan 18).

Retired policeman, Juanis Puduk, was the first to cast his vote at Stream 1 in SK Our Lady of Fatima at Kampung Kelatuan here, which is the polling district for Barisan Nasional candidate Mohamad Alamin who will also be casting his vote here.

"In the last general election, I came at 10am, but based on experience it is better to come early.

"My wife and I, who are also voting at this polling district, have not had our breakfast so after this we will find something to eat," said the 72-year-old from Kampung Langkawit.

The Election Commission had previously forecasted a 70% voter turnout of the 29,619 people eligible to cast their votes today.

There are 19 polling districts with 68 polling streams, which will be closed at 5pm and official results are expected latest by 10pm.

On Tuesday (Jan 14), eight out of nine early voters cast their ballots at the Membakut police station with one absentee.

A total of 650 electoral staff has been appointed to be on duty and EC has made a new initiative of setting up video cameras at the streams for record purposes. The vote tallying centre for the by-election would be held at the Datuk Seri Panglima Haji Mohd Dun Banir Hall in Beaufort.

The Kimanis by-election is a straight fight between Parti Warisan Sabah's Datuk Karim Bujang and Alamin.

The Kimanis seat was declared vacant after the Federal Court on Dec 2 upheld the Election Court's ruling, nullifying former foreign minister Datuk Seri Anifah Aman's victory in the 14th General Election in May 2018.

Anifah had won the seat with a 156-vote majority, securing 11,942 votes against Karim's 11,786 votes while another candidate, Jaafar Ismail of Parti Harapan Rakyat Sabah, had obtained 1,300 votes. 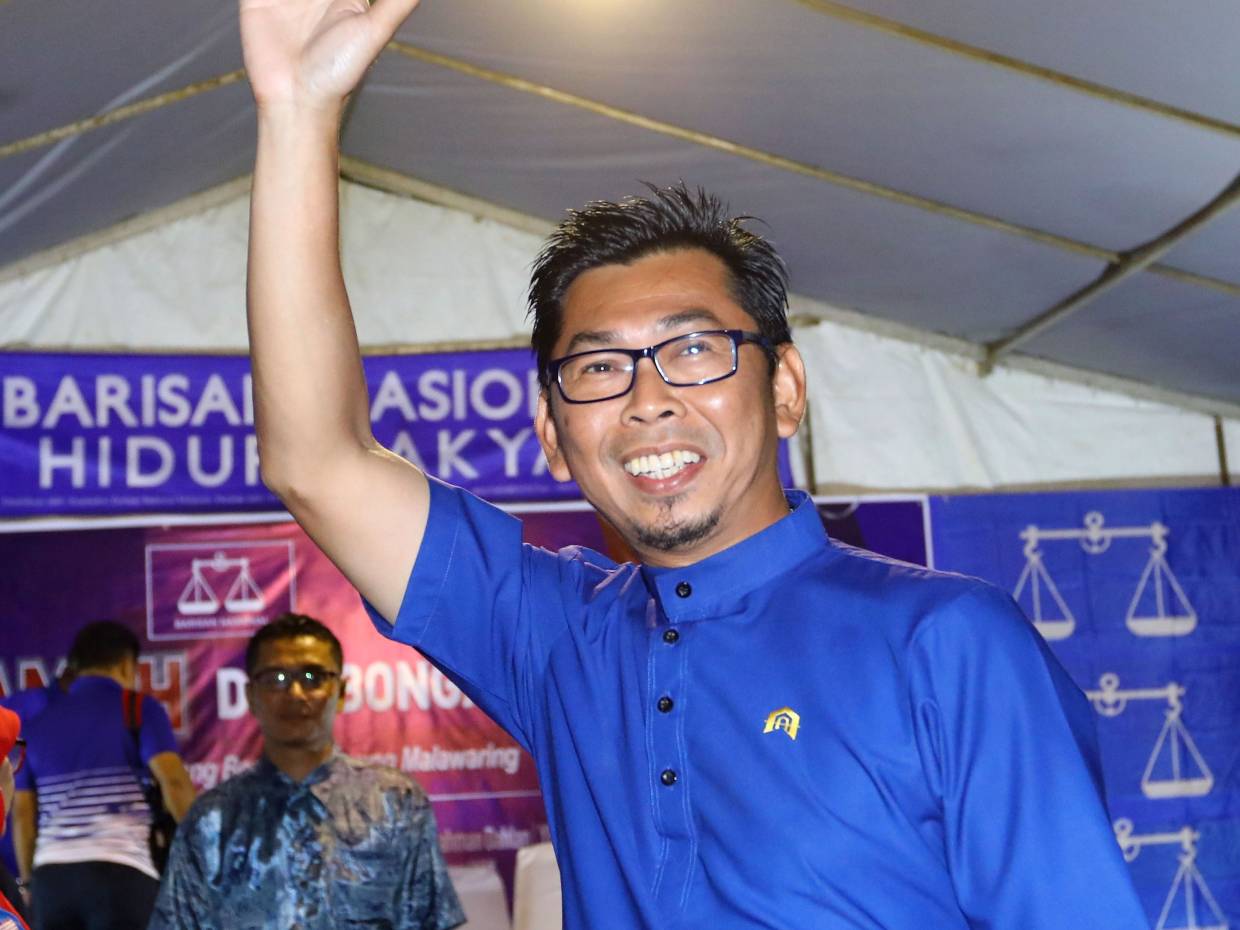 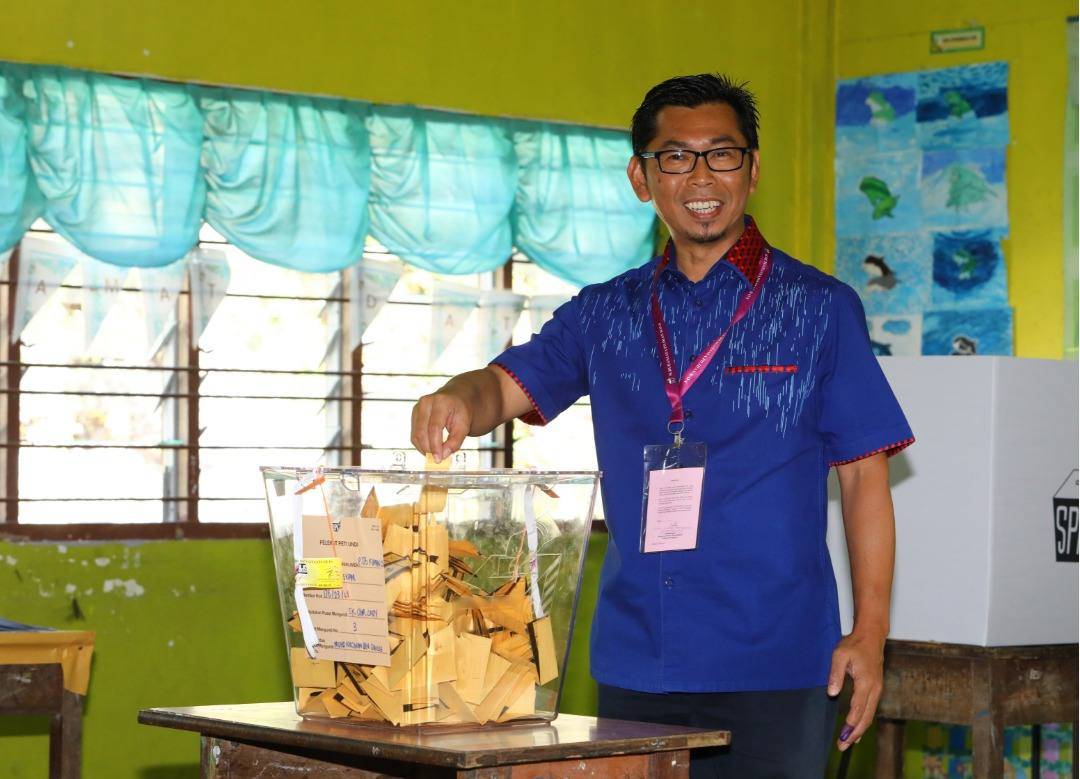 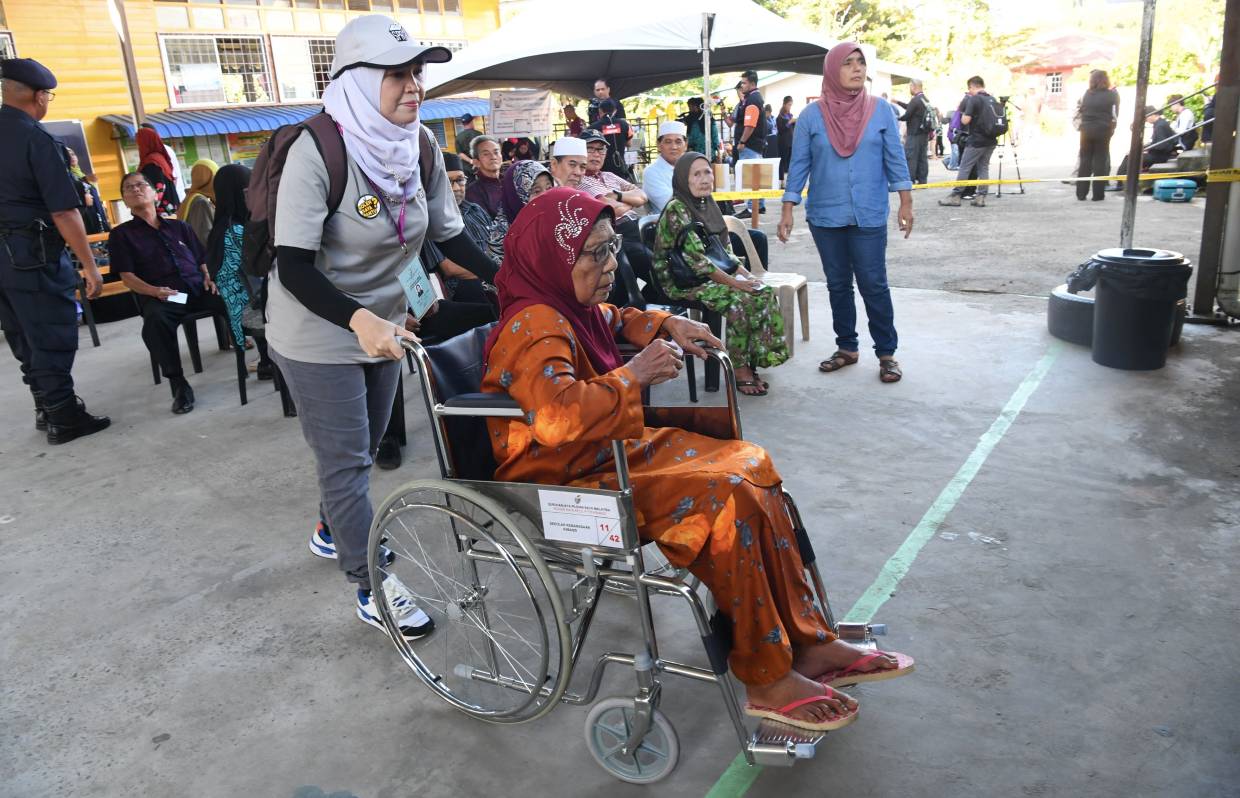 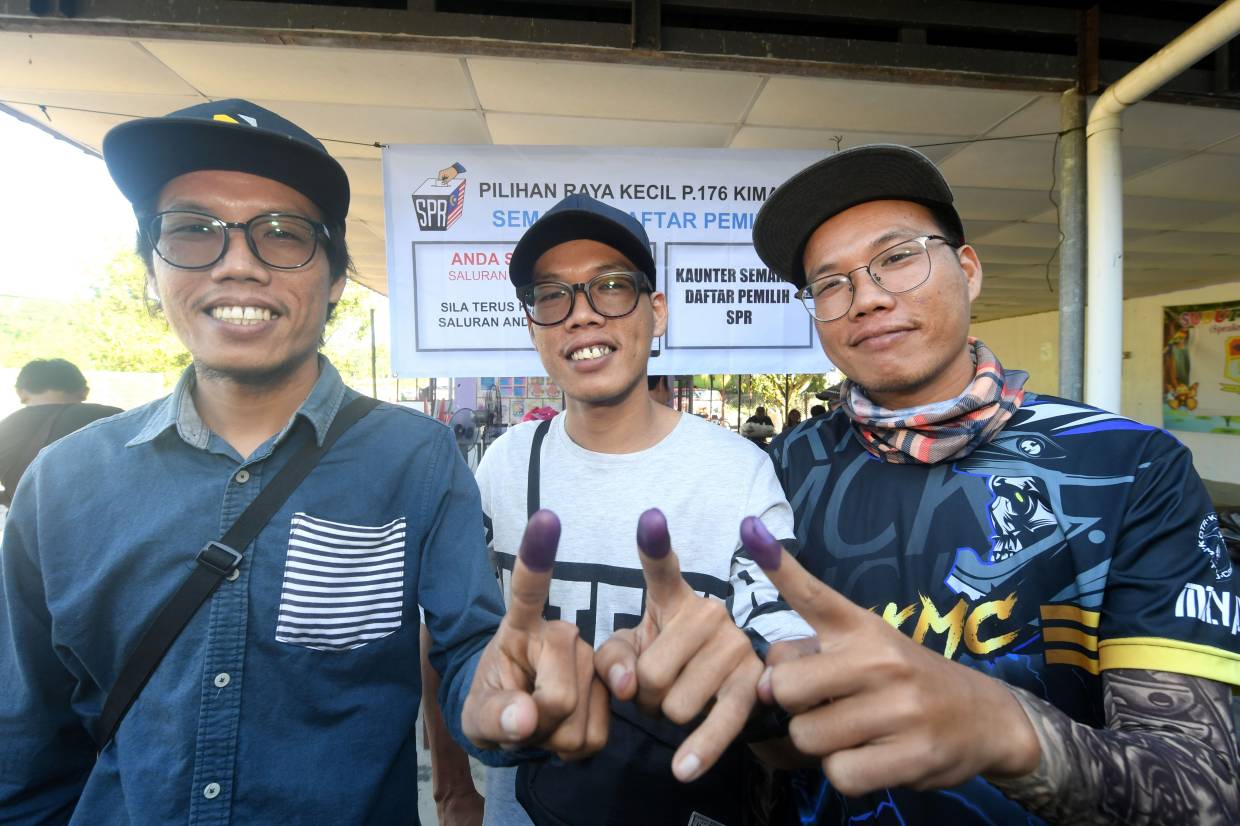 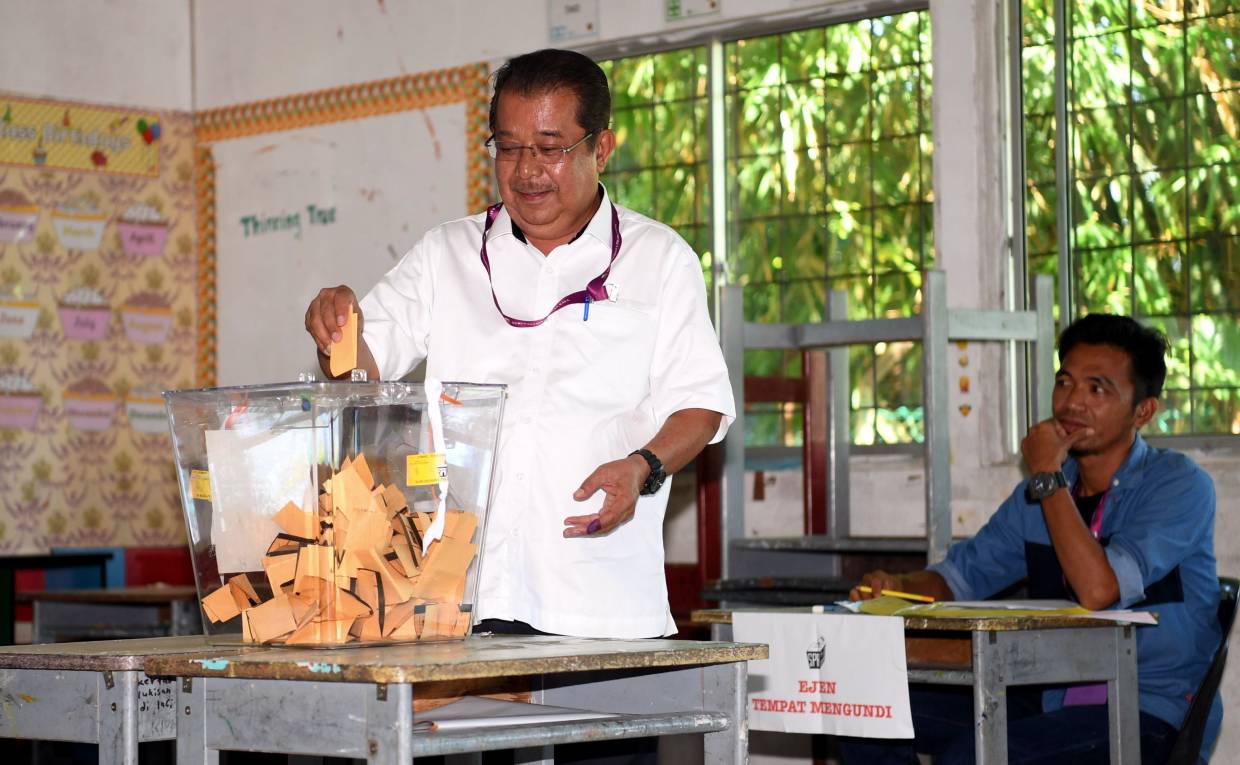 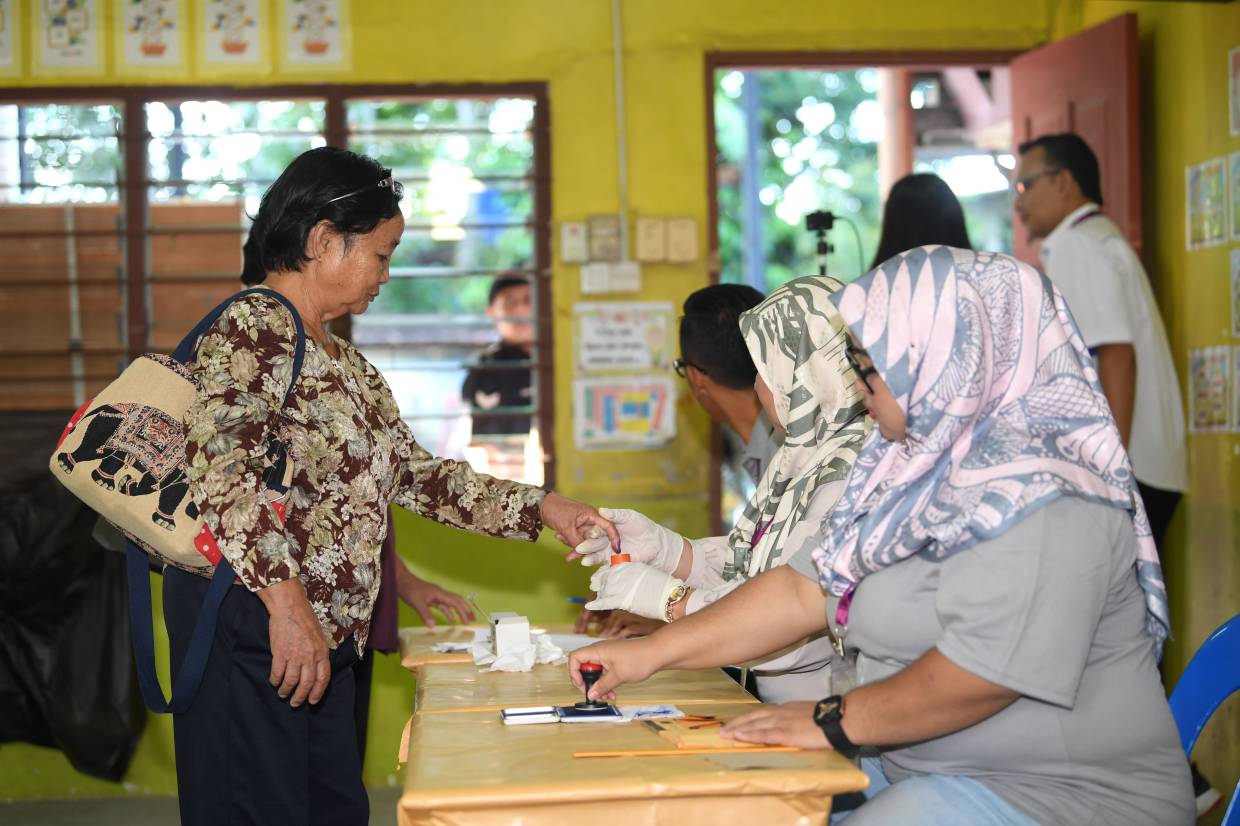 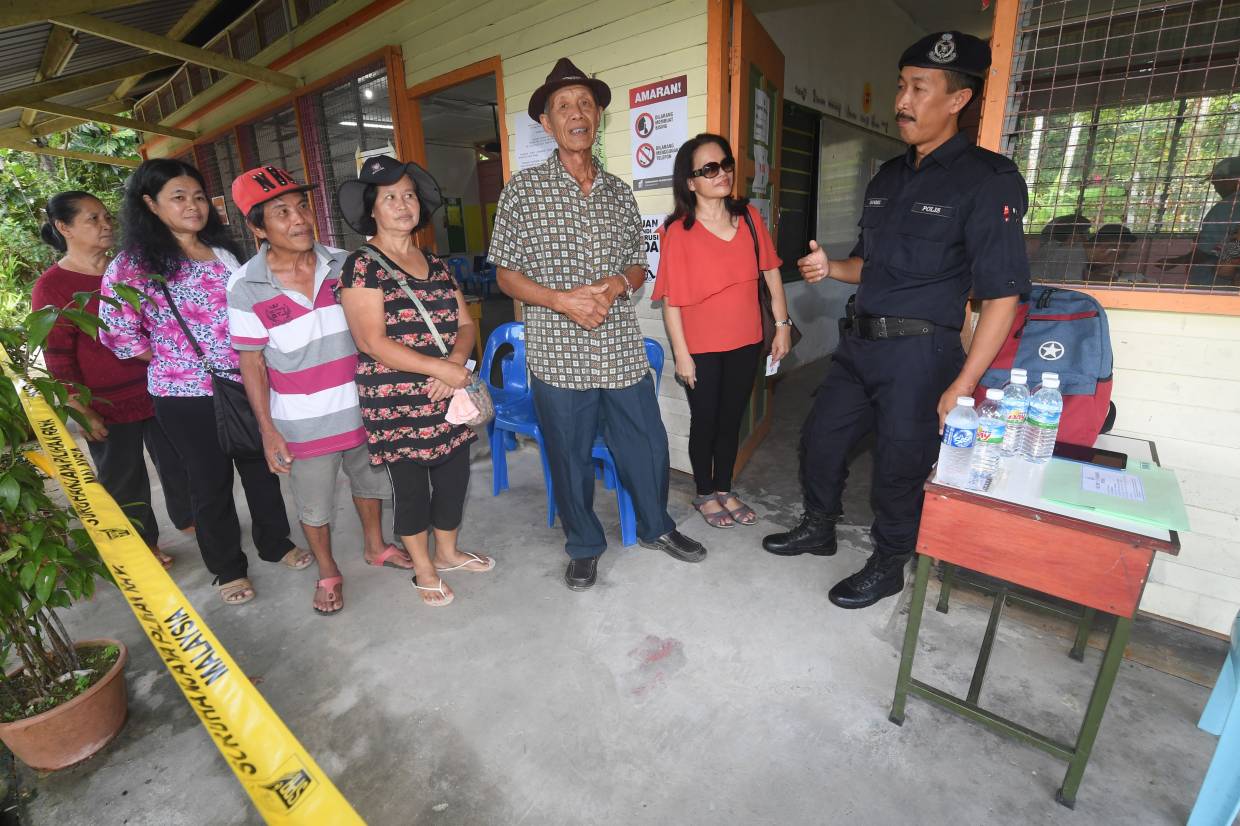 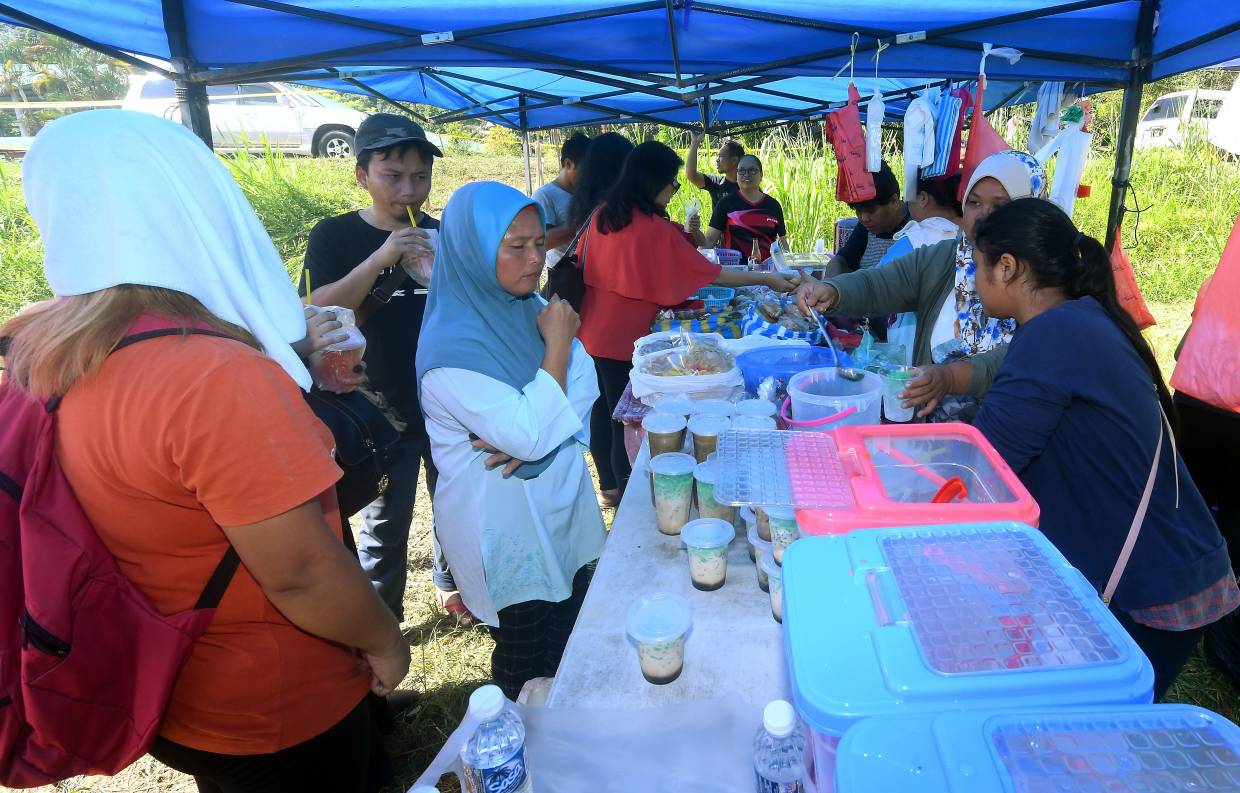 Ramella Joos, 27 with her two month old baby, Aara Ayesha Syazwan dropping her ballot paper inside the ballot box at Sekolah Kebangsaan Our Lady of Fatima, one of polling centres in the Kimanis by-election on Saturday - ZULAZHAR SHEBLEE/ THE STAR

A policeman (right) standing in front of the main door at a polling station in Sekolah Rendah Jenis Kebangsaan (C) Cheng Ming. -Bernama

Voter turnout in Kimanis at 70.20% as at 3pm, surpasses target set by EC

More than half turn out to vote in Kimanis, cops say all's calm at polls