Detained businessman had affairs with over 100 women

Compiled by CHOW HOW BAN and HANIS ZAINAL

A FORMER chairman of an asset management company in China, who has been detained for corruption, is said to have had affairs with over 100 women.

Tales of Lai Xiaomin, 57, gifting his former wives and lovers properties and housing them in a neighbourhood in Zhuhai city had appeared on social media, China Press reported.

Apparently, these former spouses and lovers, and also their children, lived in the same area without much problem. He had also allegedly given the women positions as managers, executives and directors in his companies.

Lai was arrested in April.

Authorities had found more than 100 properties under his name and some 270 million yuan (RM159mil) in cash weighing about three tonnes at his home.

Investigations also revealed that Lai’s mother had received bribes of up to 300 million yuan (RM177mil) and that his total ill-gained assets were estimated at more than two billion yuan (RM1.18bil).

Lai was a Chinese Communist Party delegate of the National People’s Congress from 2013 until 2018.

He was expelled from the party and he is the first party leader since 2017 to be charged in court for bigamy.

> Guang Ming Daily reported that Taiwanese actress Joey Chen had evaded journalists who wanted to ask her about her relationship with a Malaysian whom she met recently on Meeting Mr Right.

Chen, 40, was paired with the man called Alan in the TV show. Both had seemed to have developed steady ties since then.

On Sunday, when Chen attended a charity event in Guangzhou, China, journalists clamoured to interview her.

However, she declined to oblige and rushed to the airport to catch a flight to Shanghai, where she had to shoot a TV drama.

The reporters had wanted to ask about the speculation that she and Alan had gotten married.

She is of Chinese-German descent, whose father is the late German biologist Josef Margraf, who had lived and worked in Yunnan province’s Xishuangbanna Dai autonomous prefecture for 13 years.

Her mother is Li Minguo, a well-known environmentalist in China.

Vanda’s role as Wan Ruonan, who is a strong and positive character despite being bullied by her schoolmates, had won praise from movie critics.

The Ip Man 4 movie has pocketed more than 200 million yuan (RM118mil) in box office in China within two days after its premier.

The above articles are compiled from the vernacular newspapers (Bahasa Malaysia, Chinese and Tamil dailies). As such, stories are grouped according to the respective language/medium. Where a paragraph begins with a >, it denotes a separate news item.
Article type: metered
User Type: anonymous web
User Status:
Campaign ID: 46
Cxense type: free
User access status: 3
Join our Telegram channel to get our Evening Alerts and breaking news highlights 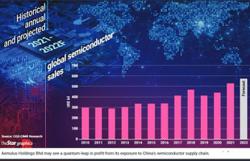